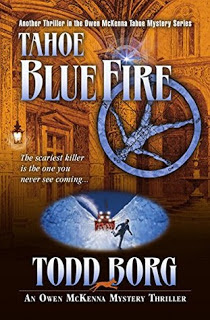 
PROLOGUE The big rotary snowblower was parked in the dark at the side of the road where the shoulder had been cleared of snow. The unusual snow removal machine was one of the huge ones, built on a double engine chassis, designed for clearing highways. The driver engine was idling quietly despite its size. The much larger blower engine was off. Because that engine made so much noise, the operator would fire it up at the last minute.


"It would be too dangerous for me to come to your office," the woman on the phone said. She had told me her name was Scarlett Milo and that she'd wanted to meet and that she was in significant danger.

My comments:
Another in the Owen McKenna Mystery thriller series that I have enjoyed so much. The author always includes some pressing and important social issues in his novels, and this one is no exception.
An important part of the plot is the issue of football head injuries and memory loss suffered by many retired professional football players.

The author also touts Lake Tahoe and environs, highlighting its lakes, mountains, ski resorts, as part of the charm of the surroundings. These surroundings of course play a large part in the suspense, chases, and atmosphere of the novels.

In Tahoe Blue Fire, a woman is shot on the deck of her mountain home, a house is burned down, and Owen McKenna, PI, is targeted more than once in attempts to stop his investigations of several recent murders, some of them by shooting and others more bizarre. The motives for crime are somehow tied up to a Renaissance legend. Owen travels to Florence and Tuscany, Italy to get information from Renaissance scholars about the legend of the Blue Fire of Florence, to see how this might link to the Tahoe murders.

Suspenseful as always, and very atmospheric, this is another excellent thriller by Todd Borg. I recommend it for those mystery lovers who are also history buffs, armchair travelers, and lovers of the outdoors.

For more info on the author and his books, visit ToddBorg.com

Based on the book beginning and teaser, would you keep reading?
Thanks to the author for a review copy of this book.
at August 25, 2015

Oh, I love books set in Tahoe...and a mystery is always a book I enjoy. Thanks for sharing, and here's mine: “ONE MOMENT, ONE MORNING”

I am not familiar with this author or series, but it sounds like I should be! I do like the sound of this one. Thank you for sharing!

I like a good mystery, but I really like the idea of a social issue as a part of the plot. I'm going to have to find this series.

Sounds like there's a lot to recommend this book. I've been to Lake Tahoe once (in summer), and I'll never forget its beauty. It would be fun to read a story set in that area, especially one that also includes a visit to Italy!
My Tuesday post features SAMUEL & SOPHIA.

I'd keep reading. I love the setting and what you shared.

I want to read this series. Love the setting and any book that starts with a snow blower (which I've never actually seen in real life) sounds good. :-)

Mysterious opening, I'd read more. Thanks for joining us.

I've not heard of this author or series before. I love a good mystery.

I just heard on the news abt. a young 16 year old football player. Sad.