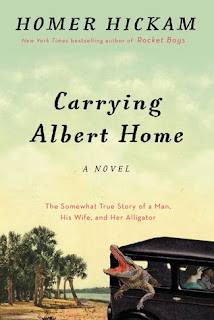 Carrying Albert Home: The Somewhat True Story of a Man, His Wife, and Her Alligator, a novel by Homer Hickam, to be released October 13, 2015 by William Morrow

...the funny, sweet, and sometimes tragic tale of a young couple and a special alligator on a crazy 1000-mile adventure, the couple taking the alligator Albert from West Virginia to his original home in Orlando, Fla.  (publisher)


When Elsie came outside into the backyard to see why her husband was shouting her name, she saw Albert lying on his back in the grass, his little legs splayed apart and his head thrust backward. She was sure something awful had happened to him but when her alligator raised his head and smiled at her, she knew he was all right. The relief she felt was palpable and nearly overwhelming. After all, she loved Albert more than just about anything in the whole world. She knelt and scratched his belly while he waved his paws in delight and grinned his most toothsome grin. (from an ARE; the final copy may differ)

LOL! now this is something different from the usual!
trish - my teaser

This does sound like a fun read. I hope it's good. Thank you for sharing!

How in the world could a person love an alligator?? :) I would give this book as a gift to someone who loves alligators.

Very unusual and maybe a little zany! Do alligators even have "paws"?

This is different, but sounds like fun. I hope its not a big alligator.

OMG, an alligator for a pet. Strange, but in a wonderful way.