Book Beginning: Two Dogs and a Parrot by Joan Chittister 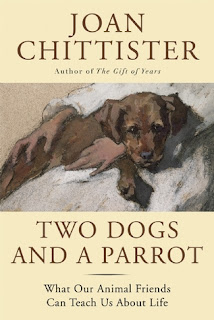 Two Dogs and a Parrot by Joan Chittister, to be released October 13, 2015 by BlueBridge
Genre: nonfiction, stories and reflections
(Book quotes from an uncorrected proof; final copy may differ)


Danny was an unexpected birthday gift from a friend. The small convent, in the small town in which we were teaching at the time, was also "not the kind of place that dogs belonged," I suppose.But the difference was that this time, we were all agreed to give the situation a try.

And that's where Danny came in.
Danny was a big red Irish setter. To those who know, the very name, Irish setter, rings of action and excitement and an unbounded, and unboundaried, love of life and of people. The problem was that I was not one of the people who knew that...

Page 57
The woman had been coming to the monastery to see me for several months now. She was a fragile but valiant personality. Nothing much ever changed in her life, but she went on functioning regardless.

Book description:
Joan Chittister, one of our leading inspirational writers, invites us to embrace and celebrate the deep bond between humans and animals.

Interesting! I have heard Irish settlers are really energetic so I can see one not being perfect for a convent!

Hi,
I love reading animal stories, I'll have to check this one out.
Have a great day!

My sister had an Irish Setter. She never grew up. Just stayed in puppy mode. LOL Such a lovely dog.

I am a day behind because of an emergency visit to the veterinarian clinic with the dog yesterday so your book is a good match with my experience.

I'd read this one. I love animals, and books that are centered around them.
Hope you had a great weekend!