Bibliophile By the Sea hosts First Chapter, First Paragraph every Tuesday. Share the first paragraph(s) of your current read or book interest, with information for readers. Also share a teaser from the book with Teaser Tuesday at A Daily Rhythm.

My choice this week is a library book: 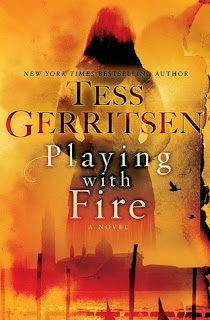 Playing with Fire: A Novel by Tess Gerritsen, published October 27, 2015 by Ballantine
Genre: thriller
Source: library
A beautiful violinist is haunted by a very old piece of music she finds in a strange antique shop in Rome.
The first time Julia Ansdell picks up The Incendio Waltz, she knows it’s a strikingly unusual composition. But while playing the piece, Julia blacks out and awakens to find her young daughter implicated in acts of surprising violence. And when she travels to Venice to find the previous owner of the music, she uncovers a dark secret that involves dangerously powerful people—a family who would stop at nothing to keep Julia from bringing the truth to light
(publisher)


From the doorway I can already smell the scent of old books, a perfume of crumbling pages and time-worn leather. The other antiques stores that I've passed on this cobblestoned alley have their air conditioners running and their doors closed against the heat, but this shop's door is propped open, as if inviting me to enter. It's my last afternoon in Rome, my last chance to pick up a souvenir of my visit. Already I've bought a silk tie for Rob and Lily, but I haven't found anything for myself. In the window of this antiques shop, I see exactly what I want.


"Beware the ignorant, Lorenzo. They're the most dangerous enemy of all, because they are everywhere."

I have just gotten the book from the library and am looking forward to reading it, having read a few of her other books.

I guess her space thriller, Gravity, was published before the movie with a similar plot was made. Here's a description from goodreads of her 2004 book: An experiment on micro-organisms conducted in space goes wrong. The cells begin to infect the crew with deadly results. Emma Watson struggles to contain the deadly microbe while her husband and NASA try to retrieve her from space, before it's too late. Sounds thrilling.

What are you reading this week, and would you read Playing with Fire based on the beginning and teaser?
at November 24, 2015

I have read one book by this author from the Rizzoli and Isles series...this one sounds good! Thanks for sharing, and here's mine: “SNOW ANGEL COVE”

Who can resist a story that starts out with the scent of old books? I'd definitely keep reading to find out what she finds in the antiques store.
My Tuesday post features The Beach House.

This sounds intense! I have only read one of Gerritsen's books before--The Harvest, and enjoyed it. This one sounds different but thrilling.

I love mysteries that involve things from the past. Is there time travel in this book? Maybe you don't know yet. I'll have to read this author. My teaser is from a technology thriller called Follow Me by Angela Clarke: http://wp.me/p4DMf0-12n

How could anyone not keep going after that first paragraph. I want to know what she saw in that store that was so perfect. Sounds like a good one.

This sounds good to me; I'd keep reading.

Have a nice Thanksgiving Harvee.

I would definitely keep reading. I am only familiar with her Rizzoli and Isles books.

I've been reading her books for years. This is a new one for me. Yippee!

Oops,didn't realize there are supernatural elements in this novel. If you like that, it's a great book.