Book Beginning: Dead to the Last Drop by Cleo Coyle 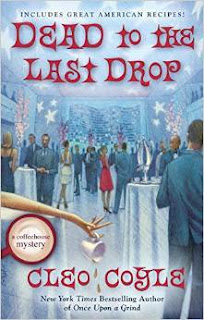 From the New York Times bestselling author of Once Upon a Grind comes a new installment in the Coffeehouse Mystery series.

After the White House asks coffeehouse manager and master roaster Clare Cosi to consult on the coffee service for a Rose Garden Wedding, she discovers a historic pot was used as a CIA “dead drop” decades before. Now long-simmering secrets boil over, scalding Clare and the people around her…


He stomped the brake and glared at the BMW swerving into his lane. I could smash this  idiot's bumper, but it won't get me to her any faster.

Suppressing the urge to turn this SUV into a battering ram, he laid on the horn instead. It worked. The Beemer swung out of his path and he hit the gas, running the next two yellow lights.


"Mike, why did you really come home early?"

Email ThisBlogThis!Share to TwitterShare to FacebookShare to Pinterest
Labels: Book Beginning, Cleo Coyle, Dead to the Last Drop, It's Friday

I have read a couple of books in this series, and I enjoyed it. This one sounds good. Thanks for sharing...and here's mine: “FOREVER, INTERRUPTED”

This is a new series to me. I think it sounds great. This week I am spotlighting The Royal Ranger by John Flanagan and Once Shadows Fall by Robert Daniels. Happy reading!

I like that action filled beginning! I'd read more to find out why he's in such a rush.
My Friday post features FEVER SEASON.

I've seen this on a few different blogs, and it's catching my interest.

I keep meaning to try a book from this series but every time I am at the library I forget to check for one. Happy Friday!

Yeah, why did he come home early and what was the rush? The title made me snicker. Love a good cozy:)

That beginning made me laugh!!
Happy weekend!

I can so sympathize with him in the beginning - I can't count the number of times I've been cut off or had mini-rage incidents in the car because of other drivers...lol...I need to start this series since I love coffee so much! Here's my Friday post

I just finished this one and really enjoyed it though it did make me want to have plates of muffins and brownies and lots of cups of coffee!

Sounds like a good one! :) Happy reading!
Check out my Friday 56 (With Book Beginnings).

This sounds like a fun cozy! The beginning is funny and interesting.

This sounds fun and I am liking what I see.
sherry @ fundinmental My Sunday Memes