Bibliophile By the Sea hosts First Chapter, First Paragraph every Tuesday. Share the first paragraph(s) of your current read or book interest, with information for readers. Also share a teaser from the book with Teaser Tuesday at A Daily Rhythm. 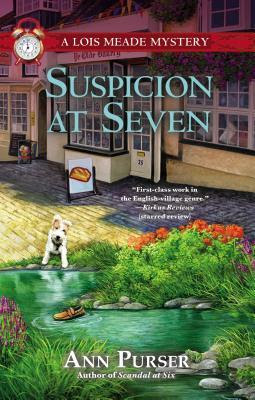 Suspicion at Seven: A Lois Meade Mystery by Ann Purser, published December 2, 2015 by Berkley.
Lois Meade has done enough buffing and polishing over the years with her cleaning business, New Brooms, to know that all that glitters is not gold. So when a bag of costume jewellery is the main clue in a murder, she has a strong suspicion that appearances may be deceiving…


Lois Meade, businesswoman and unpaid amateur detective, sat on the low wall of a millpond and watched the flow of water in the tailrace, where ducks and drakes were flapping about in the antics of courtship. It was spring, and love was in the air. Oddly enough, murder was also in the air.

What do you think? Does the beginning make you want to read on?

I'd love to be both a businesswoman and an amateur detective. That sounds like a brilliant life xD I really want to get into cozy mysteries, so maybe I should try this one out! Thanks for sharing :) I hope you have a great week and Christmas!
http://universeinwords.blogspot.co.uk/2015/12/teasers-on-tuesday-cats-cradle-by-kurt.html
Juli @ Universe in Words

Such a nice scene--warms me up a little given how cold it is right now. :-) This sounds like it will be a fun read. It's been too long since I last read a cozy mystery.

Sounds like a fun read! Have a wonderful Christmas!

I need to read more cozies this year! Love the sound of this one. Thanks for sharing...and here's mine: “NOVEMBER 9”

This one looks like I'd enjoy it, but that opening doesn't really grab me. I think that last sentence is a bit jarring to me.

I'm a sucker for a murder mystery. I'd keep reading. My teaser/intro is from Amy Tan's book, The Bonesetter's Daughter: http://wp.me/p4DMf0-15o

Yay, got to love the cozies over the cold winter! Hope you're enjoying it!

The beginning is intriguing, and I have a hard time passing up a cover that includes a furry critter of some sort!!! Thanks for sharing!