Keeping in mind these are only Christmas cozies and just for fun, don't mind the titles! I'm saving them for the holidays and hoping I will have the reading time! 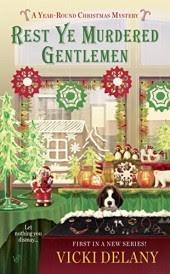 Rest Ye Murdered Gentlemen: A Year-Round Christmas Mystery #1 by Vicki Delany, published November 3, 2015 by Berkley
In Rudolph, New York: As the owner of Mrs. Claus’s Treasures, Merry Wilkinson knows how to decorate homes for the holidays. That’s why she thinks her float in the semi-annual Santa Claus parade is a shoe-in for best in show. But when the tractor pulling Merry’s float is sabotaged, she has to face facts: there’s a Scrooge in Christmas Town.


Opening sentence: The tips of the tall turquoise and green hats bobbed in the snow as elves weaved through crowds of painted dolls, toy soldiers, shepherds with their sheep, reindeer, poultry,  clowns, sugarplums, gingerbread people, and candy canes. 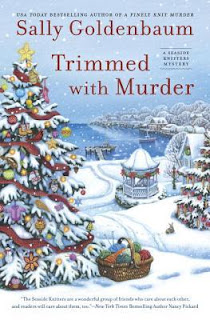 Trimmed With Murder: A Seaside Knitters Mystery #10 by Sally Goldenbaum, published November 3, 2015 by NAL
All Izzy Chambers Perry wants for Christmas is to keep her brother Charlie out of jail—in this holiday yarn from the national bestselling author of A Finely Knit Murder…But Izzy and the knitters soon have to clear Charlie of a hitchhiker's murder.


Opening sentence: Charlie hadn't yet reached the bridge that crossed over onto Cape Ann proper when he decided it was all a terrible mistake. A cruel joke his conscience had played on him, punishing him for all the wrongs in his life.

What holiday books are you planning to read?
at December 16, 2015

Getting in the mood for Christmas cozies!

I like the sound of both of these. I'm not reading a cozy, but I am reading My True Love Gave To Me by various authors. So far it's really good.

I'm still sorting and gathering. When I get off computer, I will start on one for holidays. Did read one by Francine Rivers, The Shoe Box.

I hope you will have time to read these Christmas cozies, Harvee! Have a terrific weekend.

I may have to pick up that first one - sounds like a great read for this time of year. Fun and seasonal.