Review: The Drowning by Camilla Lackberg

The Stonecutter, the third in the Fjallbacka crime series,  and The Drowning, the seventh and most recent novel, both have themes of bodies found in or near the sea. The cover of The Drowning has a picture of a young woman seeming to float under water. 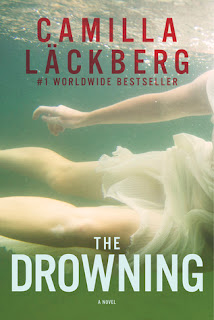 This is a police procedural set in the town of Fjallbacka, Sweden, with detective Patrik Hedstrom as the main character, and Patrik's wife Erica working unofficially as his sidekick. Erica is pregnant with twins, but this doesn't stop her from her editing job in a publishing company or from trying to solve the death of a friend of her current author, Christian.

Christian has been receiving threatening letters, which he hides from everyone including his wife, until the truth is discovered by Erica and the detective team. Erica and Patrik both delve into Christian's past, looking for clues while more strange and threatening events begin to happen to Christian and his childhood friends.

Lackberg's writing is suspenseful, though the plot is slow in parts. The author throws out clues and events that seem unconnected, till the plot threads come together toward the end to reveal a startling and disturbing reality involving the author Christian and his friends.

The main characters, detective Patrik Hedstrom and his wife Erica, are likeable and realistic, as are the other members of  the police team.

Some themes: childhood trauma, family dynamics, police procedural, and interestingly, working pregnant women (there are three in the novel, two of them on the crime solving police team!)

My objective rating: 4.5/5
Thanks to Pegasus Crime for an advance reading copy of the book which was published September 2015.

I read the first book in this series last year and enjoyed it. I have others and intend to continue reading them. I saw this book at the library the other on a display. I picked it up and looked at it, drawn in by the cover. But...must read in order. LOL