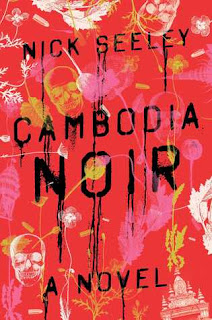 Cambodia Noir, thriller/adventure by Nicholas Seeley, to be released March 15, 2016 by Scribner.
Source: book for review from publisher

Phnom Penh, Cambodia.
Once-great war photographer Will Keller spends his days floating from one score to the next.... But Will's spiral toward oblivion is interrupted by Kara Saito, a beautiful woman who begs Will to help find her sister, June, who disappeared during a stint as an intern at the local paper (publisher)

Book beginning:
Airports kill me.
I need to stop thinking about Paris, which is close to impossible at the best of times. But in the farthest wing of Frankfurt terminal, a couple of hours before dawn, as I'm waiting for a plane to carry me away to a city whose name I cannot properly pronounce...well, it's a terrible place to be alone with one's thoughts.

Page 56:
This one isn't reading catalogs: she just puts her stuff in a bag and she goes.

My comments: A story of a former war journalist searching for a missing woman in Cambodia - these two people left their regular lives to forget and reinvent themselves somewhere else. Interesting character studies with a backdrop of corruption, politics, and danger in a developing country. I gave this noir thriller five stars.

Nick Seeley is an international journalist based over the past decade in the Middle East and Southeast Asia. His work has appeared in The Christian Science Monitor, Foreign Policy Magazine, Middle East Report, and Traveler’s Tales, among others. His fiction and criticism has been published in Strange Horizons. He is originally from Fairfax, Virginia. Cambodia Noir is his first novel.