Welcome to the Sunday Salon where bloggers share their reading each week. Visit The Sunday Post hosted by The Caffeinated Bookreviewer.
Also visit Mailbox Monday, and It's Monday, What Are You Reading? hosted by Book Date.

It was so sunny and mild yesterday, I forgot myself and went back to the gym after a long winter break! 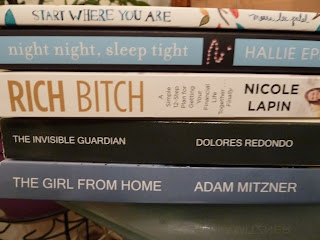 Some new ARCs and books for review:
Start Where You Are: A Journal for Self-Exploration by Meena Lee Patel, published August 11, 2015 by TarcherPerigee. An interactive journal with inspiring artwork and quotes from writers, artists and others, paired with open-ended questions and prompts, with room for writing and reflecting.

Night Night, Sleep Tight by Hallie Ephron, published December 8, 2015 by William Morrow Paperback. A tale of domestic noir, infused with old Hollywood folklore and glamour, set in a town rie with egotism and backstabbing and where fame and infamy are often interchangeable. Los Angeles 1986.
Rich Bitch: A Simple 12-Step Plan for Getting Your Financial Life Together...Finally by Nicole Lapin, published March 8, 2016 by William Morrow Paperbacks. Money expert and financial journalist Nicole Lapin lays out a 12-step plan to get your finances in order.

The Girl from Home by Adam Mitzner, to be released April 5, 2016 by Gallery Books. A gripping psychological thriller, an electrifying tale of a millionaire who will go to deadly lengths to get what he wants.

Found at the library:

The Strangler Vine by M.J. Carter, historical novel of the British East India Company and the Thuggee sect in 19th century India. Finding it fascinating, with excellent writing.

Calcutta 1837. The East India Company rules India - or most of it; and its most notorious and celebrated son, Xavier Mountstuart, has gone missing. What was it that so captivated Mountstuart about the Thugs, the murderous sect of Kali-worshippers who strangle innocent travellers by the roadside? Who is Jeremiah Blake and can he be trusted?

The Hanging Girl (Department Q #6) by Jussi Adler-Olsen, published Sepotember 8, 2015 by Dutton
Police procedural set in Denmark, the tragic cold case of a vivacious seventeen-year-old girl who vanished from school, only to be found dead hanging high up in a tree.

I have read almost all of the Department Q crime novels and enjoyed them. Carl Mørck, head of Department Q, and his quirky assistants Assad and Rose make this series memorable, with touches of humor.