Book Beginning: Why the Dutch Are Different by Ben Coates 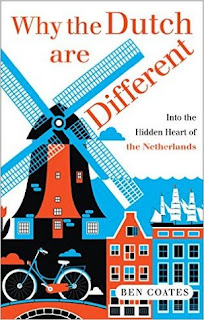 Why the Dutch Are Different: A Journey into the Hidden Heart of the Netherlands by Ben Coates
Published September 24, 2015
Genre: travel, nonfiction

Rotterdam is not a beautiful city. A sprawling industrial conurbation of some 600,000 people, the Netherland's second largest metropolis has none of the canals, cobbles or picturesque bridges of its more famous rival, Amsterdam, and as such is rarely troubled by tourists. However, much to my surprise, it soon began to feel like home. Literally hours after walking out of the airport in the snow, I found myself living in a tall, crooked townhouse, on a tree-lined street between a canal, a tramstop, and a bar selling tiny glasses of Heineken. My Caribbean suntan quickly faded and my long beard joined my tattered beach clothes in a rubbish bin on a rain-soaked balcony. By the time the snow melted, my belongings had already arrived in the post from England, and I was eating bright green erwtensoep (pea soup) with gusto. The skinny girl - a feisty, fiercely intelligent Rotterdammer with a pretty smile - showed no signs of kicking me out, and I began the slow process of integrating into Dutch society.

Page 56:
In the fourth century, the bishop Servatius died while passing through Maastricht. A basilica was built to honour of the dead pilgrims and something of a cult developed around him, with Maastricht becoming an important stopping point for pilgrims on their way to other religious centers...

Book description: a personal portrait of a fascinating people, a sideways history and an entertaining travelogue.

The Friday 56. Grab a book, turn to page 56 or 56% of your eReader. Find any sentence that grabs you. Post it, and add your URL post in Linky at Freda's Voice. Also visit Book Beginning at Rose City Reader.

Email ThisBlogThis!Share to TwitterShare to FacebookShare to Pinterest
Labels: Book Beginning, Friday 56, nonfiction, travel, Why the Dutch Are Different