Book Spotlight: The Bones of Grace by Tahmima Anam 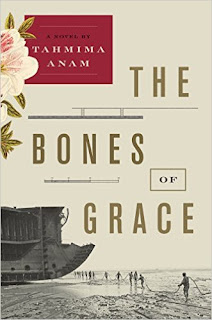 Prelude/Opening sentence:
The first words I ever said to you were: 'When I was nine years old, I found out I was adopted.'

Book description:
From the award-winning, nationally bestselling author of A Golden Age and The Good Muslim comes a lyrical, deeply moving modern love story about belonging, migration, tragedy, survival, and the mysteries of origins.
On the eve of her departure to find the bones of the walking whale—the fossil that provides a missing link in our evolution—Zubaida Haque falls in love with Elijah Strong, a man she meets in a darkened concert hall in Boston. Their connection is immediate and intense, despite their differences: Elijah belongs to a prototypical American family; Zubaida is the adopted daughter of a wealthy Bangladeshi family in Dhaka. When a twist of fate sends her back to her hometown, the inevitable force of society compels her to take a very different path: she marries her childhood best friend and settles into a traditional Bangladeshi life.
While her family is pleased by her obedience, Zubaida seethes with discontent. Desperate to finally free herself from her familial constraints, she moves to Chittagong to work on a documentary film about the infamous beaches where ships are destroyed, and their remains salvaged by locals who depend on the goods for their survival. Among them is Anwar, a shipbreaker whose story holds a key that will unlock the mysteries of Zubaida’s past—and the possibilities of a new life. As she witnesses a ship being torn down to its bones, this woman torn between the social mores of her two homes—Bangladesh and America—will be forced to strip away the vestiges of her own life . . . and make a choice from which she can never turn back. (amazon)

A wonderful love story about cultural clashes, family responsibility and duty, and a woman finding her own way. I gave this five stars!
- June 29, 2016