First Chapter: The Odyssey: A Novel of Homer's Odyssey by Patrick Dillon

I loved the Odyssey and am eager to read a new retelling featuring Telemachus, Odysseus's son left behind when his father embarked on his epic journey. 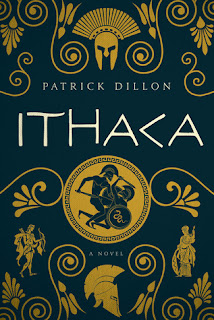 Ithaca: A Novel of Homer's Odyssey by Patrick Dillon, published July 5, 2016 re-tells Homer’s famous poem, The Odyssey, from the point of view of Odysseus’ resourceful and troubled son, describing Odysseus’s extraordinary voyage from Troy to the gates of hell, and Telemachus’s own journey from boyhood to the desperate struggle that wins back his home … and his father. (publisher)
First paragraph:


When I was younger my mother used to tell me stories. Always about my father.

The time they met - already knowing they were to be married - and spent the night on the mountain above her father's home, and Odysseus cut a sprig of laurel leaves that they swore to keep forever. The first boar he killed, aged sixteen - the age I am now. His friends had been left behind in a frantic chase through the forests. In its first charge, the beast, a monster, gored Odysseus's thigh, but he ignored the pain and hurled himself on the animal with a spear. His friends found him that evening, lying bloodied but alive across the boar's carcass.

Would you keep reading, based on the first paragraph?

Every Tuesday First Chapter First Paragraph Tuesday Intros are hosted by Bibliophile By the Sea. Share the first paragraph sometimes two, of a book you are reading or plan to read soon.
at July 26, 2016

I love the Mythological retelling of stories.

Oh, I would have to keep reading.

I'm not sure this would be a me kinda book.

I'm not sure if this would be for me but I'd keep reading for a bit to see.