An Amish mystery novel, In the Land of Milk and Honey by Jane Jensen arrived this week, and I began reading it right away, interested in the setting in an Amish farming  community in Pennsylvania. The book is fiction but is written by an author who grew up in and lives in Lancaster County in Pa. 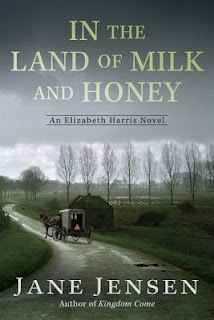 In The Land of Milk and Honey is the second in the Elizabeth Harris mystery series to be released August 2, 2016. Elizabeth Harris is a homicide detective who used to work in the NYPD, but who now works in Pa., living with her boyfriend, a former member of the Amish community.

Elizabeth is called in to help solve the mystery of the overnight death of an Amish family who seemed to have succumbed to the flu, but whose milk cows are also found to be sick and dying. I am in the middle of the novel and can't wait to find out what  and who is causing the deaths and sickness that is spreading in the Amish community.

A new galley on my desk, PhDeath, is a thriller by an author who has recommendations from writers and critics such as Pico Iyer and the author of Zen and the Art of Motorcycle Maintenance, Robert Pirsig. This is making me very anxious to read the book, the first of the Puzzler Murders by James P. Carse. It will be released September 15, 2016 by Opus Books. 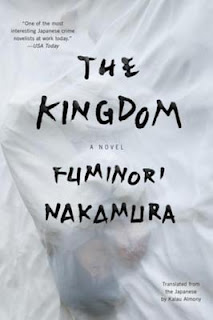 The Kingdom: a Novel  by Fuminori Nakamura was published July 12, 2016 by Soho Press. I posted a review on July 16. I enjoyed this noir thriller, set in the Tokyo underground, that had me rooting for its unconventional main character.

It has been so hot these past few weeks! We spend four days in Kansas City where it was just as hot as here at home, if not more. The highlight of the trip for me was not only the perfect air conditioned room with its brand new furniture and decor in the renovated hotel, but attending a pre-conference "concert" of the National Storytelling Conference held at the hotel by the National Storytelling Network. We listened to five experienced storytellers, at least two of whom brought us to tears with their stories and dramatic performances. Storytelling certainly is a very creative artform.

Are any of you oral storytellers as well as readers and writers?

Welcome to the Sunday Salon where bloggers share their reading each week. Visit The Sunday Post hosted by The Caffeinated Bookreviewer.
Also visit It's Monday, What Are You Reading? hosted by Book Date.
- July 23, 2016

Email ThisBlogThis!Share to TwitterShare to FacebookShare to Pinterest
Labels: In the Land of Milk and Honey, PhDeath, storytelling, Sunday Salon, The Kingdom, thriller