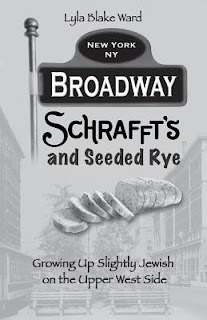 
Born Yesterday...or the day before
I think the neighborhood we now know as the Upper West Side came into being at around the same time I did -- 1928. High-rise apartment buildings were beginning to crop up along Riverside Drive by then, before the great renovation of the park was even a twinkle in Robert Moses's eye.

My mother gave birth to me at home, 375 Riverside Drive, so she would not have to be separated from her two older children: my brother George (ten) and my sister June (five). She was a very protective mother. Very. This meant I didn't start school until first grade because my mother thought too many germs lurked in kindergarten classrooms. And when I did go to school at six years old - the city of New York had the final say here - I trotted off to P.S. 54, one block on Amsterdam Avenue, bundled up to the chin like Nanook of the North, from September to June. I didn't know what cold ari felt like until I was in high school.

Meme: Every Tuesday First Chapter First Paragraph Tuesday Intros are hosted by Bibliophile By the Sea. Share the first paragraph sometimes two, of a book you are reading or plan to read soon

Based on the first paragraphs of the book, would you keep reading?
- August 02, 2016