The Fall of Heaven by Andrew Scott Cooper: Book Beginning 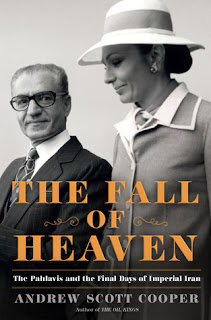 The Fall of Heaven:The Pahlavis and the Final Days of Imperial Iran by Andrew Scott Cooper, published August 2, 2016, Henry Holt
Genre: history, nonfiction
An immersive, gripping account of the rise and fall of Iran's glamorous Pahlavi dynasty, written with the cooperation of the late Shah's widow, Empress Farah, Iranian revolutionaries and US officials from the Carter administration (publisher)


Introduction: Back to Cairo

On Sunday, February 15, 2015, under a low, grey canvas of threatening skies, two motorcades flanked by police escorts pulled up outside the Unknown Soldier Memorial in Cairo, Egypt. Bodyguards armed with automatic weapons quickly formed a protective cordon, and military officers in attendance smartly saluted, but the smiles on the faces of the two women at the center of the scrum showed they were more interested in each other than in the men fussing around them. Farah Pahlavi, Iran's last queen and empress, and Jehan Sadat, former first lady of Egypt, were old friends and had looked forward to their reunion....Forty years ago, Farah Pahlavi and Jehan Sadat were young women at the forefront of progressive change in the Middle East. Passionate advocates for the rights of women and children,  they lobbied for passage of laws to empower women in the workplace and in the family....

What intrigues me about this history is that the Shah's widow, the Iranian revolutionaries, and U.S. officials from Carter's time in office all contributed to or approved this account of events.

Email ThisBlogThis!Share to TwitterShare to FacebookShare to Pinterest
Labels: Book Beginning, history, The Fall of Heaven

That's interesting. I know that officials in Carter's administration were aware of Iran's struggles, but its interesting that they would approve of this account, especially given who else approves of it.

Maybe "approve" is not the right word, Serena, but it seems they all "cooperated" with the author for his account.

Sounds fascinating! I had no idea these two women were so influential in bringing change to the Middle East.
My Friday post features CHASING CHARLIE.

I love history and current events. Recent Iranian history has been especially interesting to me lately. It is so relevant in terms of current world politics as well as the struggle for human rights.

I think that I would enjoy reading this book.