Book Beginning: The Waters of Eternal Youth by Donna Leon 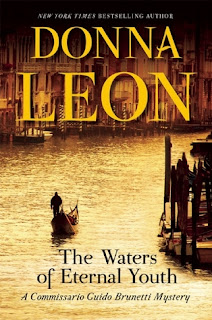 He had always hated formal dinners, and he hated being at this one. It made no difference to Brunetti that he knew some of the people at the long table, nor was his irritation lessened by the fact that the dinner was being held at the home of his parents-in-law, and because of that, in one of the most beautiful palazzi in the city. He had been dragooned into coming by his wife and his mother-in-law, who had claimed that his position in the city would add lustre to the evening.

....'There's a man who keeps asking Chiara and some of her friends for money. Over near her school. She says he's very insistent.'

Memes: The Friday 56. Grab a book, turn to page 56 or 56% of your eReader. Find any sentence that grabs you. Post it, and add your URL post in Linky at Freda's Voice. Also visit Book Beginning at Rose City Reader.
- January 06, 2017