A young woman follows winter across five continents on a physical and spiritual journey that tests her body and soul, in this transformative memoir of adventure and courage. (publisher) 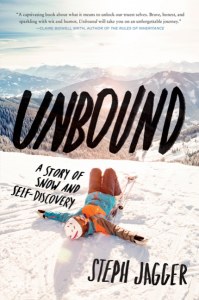 About the book: I was so glad to join this tour of a memoir written by a woman who wanted to test her resolve, her courage, and to set herself a difficult task in order to challenge herself. She learned a lot about herself and became a new, liberated woman after her ski adventure and her goal of skiing 4 million feet in several countries across the globe in a year.

Background and conflict: Believing she was the odd one in her family of conventional but very successful people, the youngest child in her family, Steph, first achieves goals her family would approve of - education, a successful career, a home of her own. Then she sets out to prove to her family and to herself that she is really one of them -  as tough, as driven, and as physically and mentally capable as any of the men, more than equal to them.

The result: She achieves her goal, but her greater achievement was finding herself after facing the challenges she set for herself - skiing down 4 million feet of snow all across the globe. Steph comes to realize in the end that she is her own person, not an extension of her family, and that she doesn't need to keep proving herself to them.

The ski trips: Her year-long ski adventure takes her from her home in British Columbia, Canada to five continents, starting with South America, where she skies in Chile and Argentina. She then flies to the ski resorts of New Zealand to very challenging and unexpected ski circumstances.

After taking a break in Bali, Indonesia with a Brazilian skier she had met in New Zealand, Steph heads to Japan which doesn't offer much snow at first that year. She reunites with her parents in Tokyo, and then travels to the Japanese Alps which offered great powder snow and her best ski experience so far.

At this point, after all her up-and-down experiences, Steph begins to let go of her old perfectionism, her old fears, and starts forming a new self. She heads to the European Alps in France, then off to Italy's Matterhorn, skips Austria and other resorts and heads back to Vancouver. She then flies to San Diego to meet with Chris, a skier she had met in South America, the person she would eventually marry.

Steph skied downhill more miles than needed for the Guinness world record, she finds, but didn't have the photos, paperwork, and eye witness accounts to support a claim. That was left to Pierre Marc Jette, who contacted Steph about her ski adventure before he went on to ski over 6 million feet from 2014-2015, to become the new Guinness Record holder.

Recommendation: A heady adventure that armchair skiiers and travelers will enjoy and that women will easily cheer on as they read. She loved Italy the best for overall vacations - the food, wine, the cities, the mountains, and the coast.

Steph Jagger splits her time between Southern California and British Columbia where she dreams big dreams, writes her heart out, and runs an executive & life coaching practice. She holds a CEC (certified Executive Coach) degree from Royal Roads University and she believes courageous living doesn’t happen with one toe dangling in, but that we jump in, fully submerge, and sit in the juice. Think pickle, not cucumber.

You can find her at www.stephjagger.com or on Instagram @stephjagger.

Read other reviews on the tour.

I can see avid skiers following winter around.

I love Italy the best as well, for many of the same reasons!