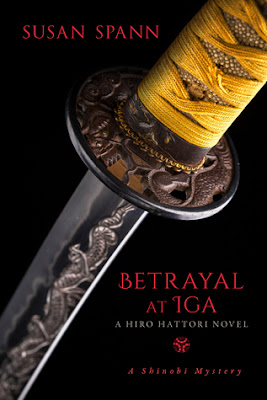 This is the fifth in the Shinobi mystery series set in 16th century Kyoto, Japan, and featuring the ninja/shinobi Hiro Hattori and the Portuguese Jesuit priest, Father Mateo.

About the book: The mystery novel shows the danger and tension between different samurai clans, their perilous way of life as warriors, and the violence that could erupt between and among them at any time. Hiro has to navigate in this setting and climate, carefully leading his charge, the Portuguese priest, around traps and keeping Fr. Mateo from making life threatening mistakes of protocol in his action or speech.

The plot: In Betrayal at Iga, Hiro takes Fr. Mateo to refuge in Hiro's home village with his clan in the mountains, Iga province. But there is no certain safety here, as a rival clan has arrived for peace talks with Hiro's clan. When the visitor clan's leader is found murdered, tensions and suspicions ratchet up and no one is safe, including Hiro himself, his mother, or even his former lover.

Hiro and Fr. Mateo, through interviews, detection, and observation, are hard pressed to solve the murder or risk the loss of innocent lives.

My review: This is one of the best in the series. The book has a compelling plot, in addition to the intriguing characters and the unusual setting of time and place.

I enjoyed learning about samurai culture, its dangers and its uniqueness in history. The author is able to immerse us in the culture, while giving us a suspenseful murder mystery that keeps us on edge.

Her love of the historical subject is evident in her writing and meticulous research into the time and place. I highly recommend the book, which can be read as a stand-alone novel, as well as the preceding ones, and look forward to the next in the series.

Hiro Hattori leaned into the wind that swept down the hill and across his face. He pulled his kimono tighter and glanced at the Portuguese priest beside him. "Remember you must eat everything set before you -."
"- because leaving food on the plate offends the host," Fr. Mateo smiled. " I have attended Japanese feasts before." 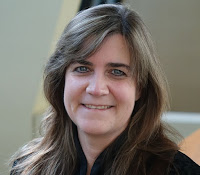 Susan Spann is a transactional publishing attorney and the author of the Shinobi Mysteries, featuring ninja detective Hiro Hattori and his Portuguese Jesuit sidekick, Father Mateo. Her debut novel, CLAWS OF THE CAT (Minotaur Books, 2013), was named a Library Journal Mystery Debut of the Month.

Susan has a degree in Asian Studies from Tufts University, where she studied Chinese and Japanese language, history, and culture. Her hobbies include cooking, traditional archery, martial arts, and horseback riding. She lives in northern California with her husband, son, two cats, and an aquarium full of seahorses.

Connect with Susan: Website | Facebook | Twitter
Thanks to TLC Book Tours and the author for a review copy of this novel. For other reviews of the book see the tour schedule.

Great excerpts and cover! Thanks for sharing...and here's mine: “CLOSE YOUR EYES, HOLD HANDS”

I agree, that cover is striking, no pun intended!

Nice post...sounds good even thought I don't read in this genre.

Thanks for coming by my blog.

History plus mystery, not a bad combination. Thanks for stopping by.

This sounds good. I don't usually read historical fiction, but you have me interested. Have a great weekend!

It would be quite an historical ride, Yvonne! In a good way.

Glad to be part of the tour, Heather.

This sounds good. A book about samurai clans clans seems fascinating in of itself.

It is a good historical mystery, Brian. Takes you to a different time and place!