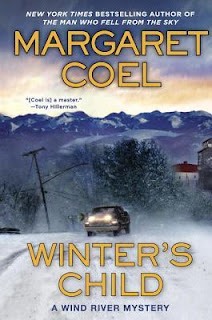 Plot: An Arapaho couple hire an attorney, Clint Hopkins, to help them adopt a child they had been caring for over five years. The child had been left as an infant on their doorstep and the couple had taken her in. But while working on the adoption case, the attorney is killed in a suspicious hit-and-run, and Vicky Holden steps in to solve a crime involving the past and the mystery of the child.

My comments: The book has an intriguing and suspenseful plot. It appears to be a straightforward request from the lawyer, Clint Hopkins, to Vicky, asking her to be a cocounsel in the adoption of a five-year-old girl by an Arapaho couple. But the case quickly involves murder, and Vicky is left on her own to solve the mystery. The ending, which I won't give away, is not a clear cut solution, but realistic.

Snow had fallen all day, dense cotton fluff that cocooned the brick bungalow in a white world and obscured the small sign: Vicky Holden, Attorney at Law. Now the snow dissolved into a white dusk as Vicky drove through the side streets of Lander, tires bumping over ruts and ridges. The heater kicked into gear, and warm air streamed into the frosty cold that gripped the Ford. She hunched over the steering wheel. She was late.

"Come on, Uncle John." She stopped in her tracks and was looking up at him. "No one in my generation believes in fairy tales. Ever after just doesn't happen. It never did, really. Your generation was the last to cling to that belief...."

Memes: The Friday 56. Grab a book, turn to page 56 or 56% of your eReader. Find any sentence that grabs you. Post it, and add your URL post in Linky at Freda's Voice. Also visit Book Beginning at Rose City Reader.
at September 08, 2017

Love the sound of this one! The beginning brought me right into the freezing atmosphere, which feels good to me, suffering from heat. LOL.

Thanks for sharing, and here's mine: “I’LL HAVE WHAT SHE’S HAVING”

I like the beginning. I like descriptions of weather at the beginning of a book. Anyone who has driven in cold weather can also relate to the car related stuff.

I am not ready for that snowy scenario as yet though!

I agree it's a good beginning. Sets the time and introduces the main character, Vicky.

That beginning has some beautiful writing in it!! Pulled me right in! Happy weekend!

Thanks for sharing. Happy Hopping!

This book does sound intriguing and suspenseful. Thanks for sharing some parts of it. Our weather has been a bit cooler lately, but not certainly not cold. Enjoy your weekend, Harvee!

She's a good writer, Suko. Have a great weekend!

This sounds suspenseful and perfect for fall.