Just Killing Time: Clockshop Mystery #1 by Julianne Holmes, October 6, 2015, Berkley.
There are three books in the series, and I have #1. Yay to starting out with the first in the series. 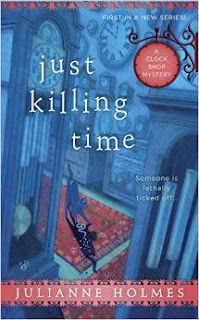 
The brochure lied. A week in the mountains of Vermont had not, in fact, helped me achieve a peaceful Zen that would pervade my life for the coming weeks, helping me approach old challenges with fresh energy. Instead, it had made me aware of two things. First, much as I hated to admit it,  I was addicted to technology. Not being allowed to have my cell phone for seven days was an interesting experiment at first, but an exercise in frustration at the end. Never mind that the battery was completely drained of power by the time I got it back.

The second realization? Coffee and I couldn't break up....

Book description:
Ruth has been named heir to Grandpa Thom’s clock shop, the Cog & Sprocket, in the small Berkshire town of Orchard, Massachusetts. But there is a problem: her grandfather had been found murdered during a break-in at the shop, and Ruth has to solve the mystery and delve into the secrets before others are targeted.

Based on the first paragraph and the book description, would you read on?

MEME: Every Tuesday Bibliophile by the Sea hosts First Chapter First Paragraph, Tuesday Intros sharing the first paragraph or two, from a book you are reading or will be reading soon.
at October 24, 2017

This does sound excellent. While I can do without coffee - but don't take away my Diet Pepsi - I too am technology addicted. Come see my book here. Happy reading!

I'd like to try this. A week sounds not too long!

Oh wow, Vermont; I like the opening; I hope you are enjoying it.

I like the first chapter so I'd keep reading.

I do love the idea of the setting...except for the murder and the absence of technology, of course. Why can't she have coffee, though?

Thanks for sharing, and for visiting my blog.

Yes, I'd keep reading. I like the little bit of humor and the set-up for the story. I hope you enjoy.

One of the books I'm reading right now, a light read.

The beginning got me too.

What's a cozy mystery without the murder, though not gory.

Though the constant sounds of tick tocking in a clock shop might drive one batty.

I have this series on my TBR but haven't gotten to it yet. I sympathize with the MC. I think I would go a bit crazy without my phone and coffee and I are most definitely not breaking up!

Don't know if I have the others of her books, but I like her writing in this one.