Book Beginning: The Making of a Dream by Laura Wides-Munoz 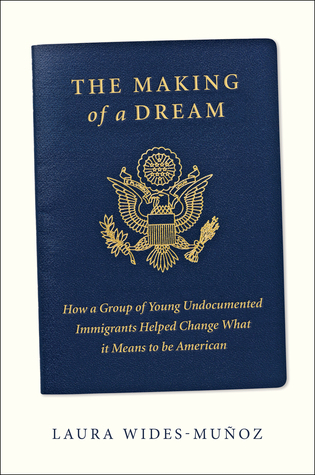 The Making of a Dream: How a Group of Young Undocumented Immigrants Helped Change What It Means to Be American by Laura Wides-Munoz, January 30, 2018, Harper

Book beginning:
It would only be a few weeks.

That's what Hareth Andrade-Ayala's parents told her when they planned he trip to Washington, D.C. Eight-year-old Hareth and her little sister would travel from La Paz, Bolivia, with their grandparents. Their parents would join the girls later.

Hareth's grandparents had lived with the family as long as she could remember, always game for her bits of theater, jokes, and dances, all the stuff her parents were too tired to sit through. She'd traveled to visit relatives with them before. This would be another of their adventures.

What was she? She was an undocumented immigrant. She was also a hard-driving honors student whe'd been high school swim team captain and had dreamed of going to college.

Book description: A journalist chronicles the story of a movement and a nation, witnessed through five young undocumented activists who are transforming society’s attitudes toward one of the most contentious political matters roiling America today: immigration. (publisher)

I'm interested in reading about the experiences of these real life young undocumented immigrants who are succeeding in their lives in the U.S. Quotes are from an uncorrected proof ; the final copy may differ.
Memes: The Friday 56. Grab a book, turn to page 56 or 56% of your eReader. Find any sentence that grabs you. Post it, and add your URL post in Linky at Freda's Voice. Also visit Book Beginning at Rose City Reader
at December 08, 2017

Email ThisBlogThis!Share to TwitterShare to FacebookShare to Pinterest
Labels: Book Beginning, Friday 56, nonfiction, The Making of a Dream

Glad to have you visit, France Book Tours! I would love to join your book tours!

Seeing the world through someone else's eyes can be a good thing.
sherry @ fundinmental Friday Memes

Sounds intriguing and certainly a topic that is in the News lately. I am featuring A Murder for the Books by Victoria Gilbert. Happy reading!

Definitely intriguing...and timely. Thanks for sharing, and here's mine: “A SEASON TO LIE”

What a disturbing and very current topic of concern. My Friday Quotes for The 57 Bus

Clever cover! This sounds like an important book. America is a country of immigrants, so we can all relate to this.