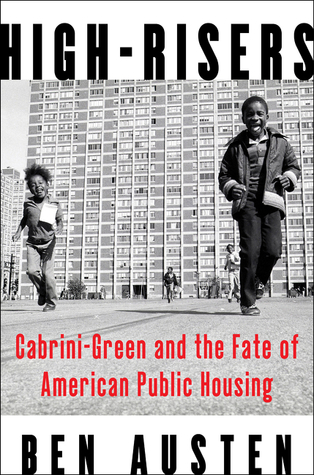 High-Risers: Cabrini-Green and the Fate of American Public Housing by Ben Austen

High-Risers braids personal narratives, city politics, and national history to tell the timely and epic story of Chicago’s Cabrini-Green, America’s most iconic public housing project.
Book beginning:
Portrait of a Chicago Slum
Tucked into the elbow where the river tacks north, just beyond the Loop and a mie from Lake Michigan, it is as historic a neighborhood as there is in Chicago.In 2016, it was named one of the city's best places to live. A couple of generations earlier, and more than a century after the banks of the Near North Side were settled, surveyors from the Chicago Housing Authority walked its narrow streets, confirming with every step their belief that it was a slum beyond salvation.

(This quote is from an uncorrected proof. The final copy may differ).
Memes:  visit Book Beginning at Rose City Reader
at December 21, 2017

I am definitely intrigued. Thanks for sharing...and here's mine: “THESE VIOLENT DELIGHTS”

Well that sounds like a pretty serious read. I hope it is interesting. My Friday Quotes Merry Christmas!