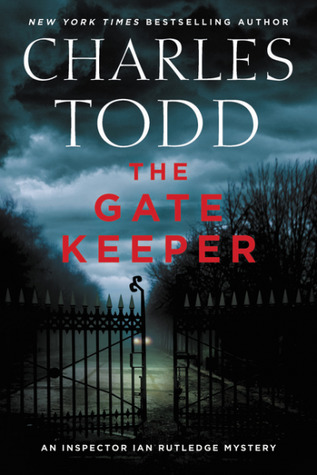 The Gate Keeper by Charles Todd,

"Ian Rutledge narrowly misses a motorcar stopped in the middle of a desolate road. Standing beside the vehicle is a woman with blood on her hands and a dead man at her feet.

That's the setting for this latest murder mystery and police procedural, set in Suffolk, England.
Book beginning:
Ian Rutledge drove through the night, his mind only partly on the road unwinding before him. He was north of London, and a little to the east of it as well. But he had no particular destination in mind.

At this late hour, he should have been asleep in his flat in London. He'd gone there with that in mind, but as soon as he had crossed the threshold it had felt different. Stuffy. Claustrophobic. Almost alien - it was where he lived, but it was not his home, had never really been his home....

Page 56:
"He wanted to come home, but he waited too long. The wonderful, foolish man."

Do these excerpts grab you as a reader or not?
Memes: The Friday 56. Grab a book, turn to page 56 or 56% of your eReader. Find any sentence that grabs you. Post it, and add your URL post in Linky at Freda's Voice. Also visit Book Beginning at Rose City Reader
- December 14, 2018