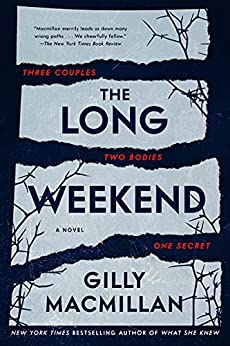 The Long Weekend by Gilly Macmillan is to be published March 29, 2022 by Century.

This thriller/mystery/suspense novel has a setting that so many other mysteries have adopted. An isolated place where people go for a quick trip or vacation; their lives then upended and threatened, where they can't trust each other. In this book, the Dark Fell Barn in the wilds of northern England in the middle of a heavy rain storm, is the perfect setting for fear, paranoia, and the sense of danger.

Three women arrive at the Barn for a long weekend getaway, and wait for their husbands to arrive the next day. But the husbands are threatened in a mysterious letter that waits for the women at the Barn. They are told that one of the men would be killed before they can arrive.

The women panic, suspect each other of harboring secrets, and flail around in the barn and outdoors in the storm, without access to wifi or cell phone connection, or an easy way to leave in the storm.

Makes for a perfect situation for a mystery.

What makes the suspense:

A writer can also throw in personal failings, such as health, physical or mental, to gum up the works and prevent smooth sailing for the characters in the book.

In The Long Weekend, you can find creeping dementia, alcoholism, dyslexia, dissasociative mental disorder sprinkled among the main characters, and of course, psychosis in the killer.  Add all these together in a mix, and there is a pot of suspense boiling for the reader.

I am finding that mystery writers are becoming more adventurous and creative about throwing people into situations and creating personalities that are out of the norm, to foster suspense in their books. But you can ask, what is out of the norm these days?

I gave the thriller five stars, just for doing all the above reasonably well.