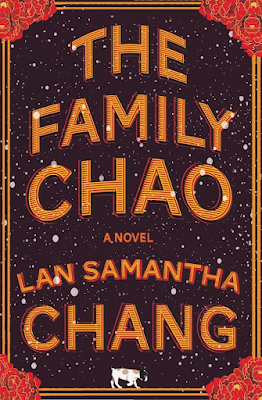 It's amazing that a chance encounter with a stranger, Zhang Fujian, carrying a small fortune in his bag would lead to the downfall of the Chao family patriarch, owner of the Chao restaurant, and lead to suspicion falling on the three sons. James, the youngest son, helping an old Chinese man at the train station began the turmoil of events. Little did anyone know that the man's blue bag, forgotten in the back of a car, would be removed and transported to different places and cause a major problem for the Chao family.How the three brothers - master chef Dagou, industrious and ambitious Ming, and college student James - stick together, facing the insults and disdain of their overbearing father during the illness and the death of their mother, and how they rally in each other's defense is admirable. Family secrets also prove fatal in this story.I enjoyed the characterization of each son, so different from one another, and the denouement of the plot in this domestic drama. There is a murder mystery to be solved, also, but I liked that the brothers join together in the face of being children of immigrants in a small American town, and in the face of possible, pending tragedy.
Critics have called The Family Chao a reimagining of  The Brothers Karamazov by Dostoevsky.
View all my reviews
Book beginning:
For thirty-five years everybody supported Leo Chao's restaurant. Introducing choosy newcomers by showing off some real Chinese food in Haven, Wisconsin.
At 56% of ebook:
Then after Winnie died, someone - one of his brothers, or even one of this parents' friends -would have carried the blue blag out of the hospital and loaded it into a car. And then what?
Memes: The Friday 56. Find any sentence that grabs you on page 56 of your book. Post it, and add your URL to Freda's Voice. Also visit Book Beginnings at Rose City Reader.
- June 02, 2022