Romance and Rivalry in Graduate School : The Make-Up Test by Jenny L. Howe 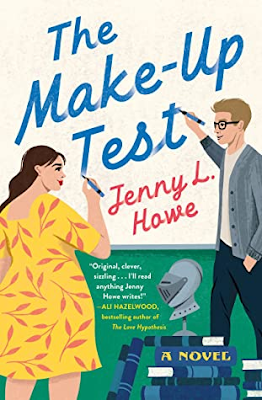 As a lit major myself, I enjoyed reading about the graduate students of medieval literature discussing and competing for awards and recognition in their work. The romance between Colin and Allison was also interesting as they were rivals in academics as well as former lovers. This provided the tension in the novel, in addition to Allison's estranged father always reviling her for being overweight.
I only wished the descriptions of Allison's physical attraction to Colin, her former college boyfriend, were not so detailed and frequent. They became repetitive after a while. About one-eighth of the book could have been cut if edited in this way.
An unusual plot and characters in an academic setting, however, that made this a four star rom com.

Chapter I
If one more person used the word hegemonic, Allison Avery was going to scream.
After almost two full week of classes at Claremore University, she should be more adjusted to the quirks of graduate-level literature courses, but it still felt like ...a lot.