Deborah Lawrenson, author of Songs of Blue and Gold, sitting on the balcony of the White House in Kalami, Corfu, where writer Lawrence Durrell lived in the 1960s.

Q: I see that you did extensive research for Songs of Blue and Gold. How long did it take, and how much travel did you have to do?


Deborah: I'd been reading about the writer, poet and traveller Lawrence Durrell and his famous zoologist brother Gerald for about six months when I realised that I wanted to explore the way the same story could appear differently in separate biographies. After that, I read everything I could find about Lawrence while I was writing Songs of Blue and Gold, which took about two years.

Naturally I had to travel to Corfu - no hardship there! I'd wanted to visit the island ever since reading Gerald's book My Family and Other Animals as a child. I went twice for research, the first time actually staying at the White House in Kalami where Lawrence lived in the 1930s. I also spent several days wandering around Sommieres in southern France with my notebook.

I really loved writing it (the novel) because I was so fascinated by Lawrence D. I had a wonderful time on Corfu doing what Melissa did, trying to see what he would have seen - and there's plenty still there. 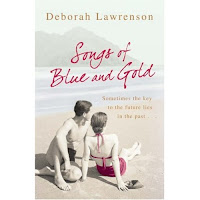 Q: How would you describe the novel?


Deborah: It's a book that combines several genres: there's an element of mystery combined with a personal journey of discovery; I tried to make it a transporting read with a strong sense of place, of the Greek island; and it also holds the ideas of biography and memoir up to the light, and asks whether either can claim to tell the whole truth about a life.

The title describes the lapis lazuli effect of the sun on the Ionian Sea around Corfu. Songs, in Greek tradition, were not only words and music but histories too. Durrell himself described Corfu, in his book Prospero's Cell, as "all Venetian blue and gold".


Q: What prompted you to become a writer? Did your journalism experience make it easier to make the transition?


Deborah: I love words and language, and always wanted to be a writer. I became a journalist because I didn't have the confidence or experience to start writing books straight out of university! Having said that, I had some wonderful times as a journalist and learned so much, knowledge that really has been invaluable - everything from how to handle tricky encounters with new people successfully, to how newspapers publicise books.


Q: Is there anything else you would like to add about this or your previous novel?


Deborah: Like my previous novel The Art of Falling, this one is concerned with very personal mysteries - and the psychology of why people act the way they do, often unaware of how their actions will affect others. In Songs of Blue and Gold, the reader's reaction to Julian Adie (based on Lawrence Durrell) and his possible guilt is all to do with how he or she reads his contradictory character, and whether in their judgement the flaws outweigh the gifts and charm.


Q: Are you planning another book at this time?

Deborah: Yes, I'm about halfway through writing a novel set in the south of France. It started off as "A modern Rebecca set in Provence" (Rebecca as in Daphne du Maurier's book, and the Hitchcock film). But as I've gone along it's become more mysterious, with gothic touches and a sense of dark history. Again it's a novel with a strong evocation of place, and sensuous descriptions: the heat and the scents of herbs on the hillsides, the light and colours.


Thanks for the interview, Deborah.


"After reading English at Trinity College, Cambridge, Deborah Lawrenson worked as a journalist and magazine editor. She has written four other novels: The Art of Falling, published by Arrow in 2005, The Moonbathers (1998) and the newspaper satires Hot Gossip (1994) and Idol Chatter (1995)."

See the review of Songs of Blue and Gold in the post below.