Book Review: Songs of Blue and Gold by Deborah Lawrenson 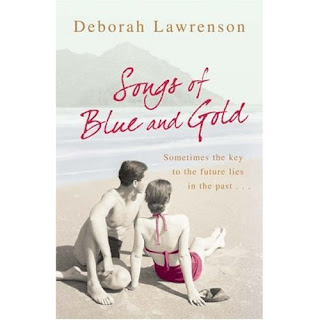 Songs of Blue and Gold is set in the lovely Greek island of Corfu. Corfu has been associated with Prospero's island, the island in Shakespeare's The Tempest. The connection was also made by the British writer, Lawrence Durrell, in his travel book, Prospero's Cell.

This is the story of a young artist Elizabeth Norden and a writer Julian Adie, two people who met in Corfu in the 1960s, had an affair there, and parted under tragic circumstances. The larger-than-life character Julian is based on the writer Durrell, who lived in Corfu in the late 1930s and again around 1968.

Plot
The novel begins many years after the Corfu affair ended. Elizabeth gives her daughter Melissa a book of Julian's poems which he had inscribed to her. The inscription reads:


"To Elizabeth, always remembering Corfu, what could have been and what we must both forget."


Elizabeth is unable to explain the meaning of the puzzling inscription; she is in the advanced stages of Alzheimer's. After her mother's death, Melissa decides to go to Corfu to search into Julian Adie's life there, and to piece together the story about what happened between her mother and the writer. (Durrell's many wives, affairs of the heart, and complex but magnetic personality are also Julian's).

Melissa visits the White House in the town of Kalami on Corfu, the place where Julian had stayed when he met her mother in the 1960s. She talks to people who knew and remembered Julian and Elizabeth but comes away with more questions than answers. In the meantime, she meets Alexandros and begins her own love story on Corfu. Eventually, Melissa's search for the true story of her mother takes her to Sommieres in France, where Julian had spent his last years.

Comments
I gave this book five stars for the skillful blending of fact and fiction, the sympathetic description of the fictional characters, Elizabeth and Melissa, the excellent prose, thoughtful and descriptive, which evokes the "spirit" of the island and Lawrence Durrell/Julian Adie's complex personality. Through Julian Adie, Durrell's life is analyzed and sifted through via his works and the events in his life, real and fictionalized. We are left with more questions, but Lawrenson give us a list of Durrell's works and a list of biographical books to continue our own research on the real man.

Songs of Blue and Gold was published in 2008 by Arrow Books, Great Britain. For more information, visit the website, http://www.deborah-lawrenson.co.uk/

Book provided by the author, for my objective review.