Book Review: Trail of Crumbs, a Memoir by Kim Sunee 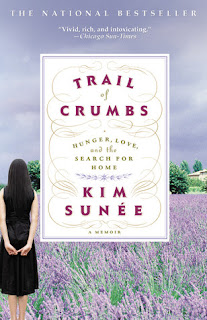 Trail of Crumbs: Hunger, Love, and the Search for Home by Kim Sunée
Genre: memoir
My rating: 4 of 5 stars

Trail of Crumbs is the memoir of a young woman haunted by memories of being lost or abandoned by her mother at age three in a Korean markeplace. Persistent nightmares and her longing for "Omma" to come back to claim her in that marketplace suggest an unfulfilling childhood in the U.S. with her adoptive family. Her adoptive mother she describes as distant and disapproving. Her happy memories in the U.S. are of her adoptive grandfather, who taught her about New Orleans food and cooking.

The book is partly about travel - Provence and Paris, France - and partly a memoir of the author's love affair with Europe, European food, and European men - very different from the "narrow" and circumscribed life in New Orleans. Kim Sunee escapes to college in France and stays to live in Europe for many years with her French lover Olivier and his young daughter. When she doesn't find fulfillment in this either, Sunee finally tries psychotherapy in France, where a psychiatrist tells her the problem - she is divided.

A quick trip to Asia, suggested by Olivier, doesn't do anything to heal this divide. Korea is unsatisfactory, and she becomes sick on a trip to China. She finally accepts herself and her life while spending time in French Guiana - a simpler place than any she has ever lived in.

Those interested in memoirs, adoption and adopted children, French food and recipes, and Provence, will enjoy the book - the personal journey of a Korean American woman and food writer seeking to find out where she belongs.


Kim Sunee is "founding food editor for Cottage Living and the host of 'Local Flavor with Kim Sunee' for MyRecipes.com." Her website is www.KimSunee.com


Thanks to the Hachette Book Group for the review copy of this book.