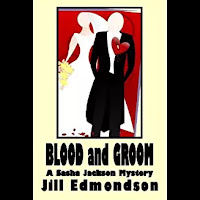 Blood and Groom by Jill Edmondson


Someone in Toronto has murdered nearly bankrupt art dealer Christine Arvisais's groom-to-be. Former rock band singer and neophyte private investigator Sasha Jackson lands the case because she's all Christine can afford. The high society gal was jilted at the altar and she's the prime suspect, not to mention Sascha's first major client.


Relying on wit, technology, luck, and a nerdy semi-stalker to help her clear the unlikable Christine's name, Sasha digs further into the muck only to discover high-finance shenanigans, an unnerving pattern of slaughtered fiancés, and a growing list of brides that never were who might be killers. Along the way, the wisecracking, sassy sleuth uncovers murky secrets among the city's bluebloods, including drug addiction, art forgery, and possible insider trading.


In order to trap the murderer, Sasha enlists her ex-boyfriend and former band mate to pose as her fiancé, but will her ruse make her ex the next victim on the hit list and lead to her own untimely demise?

My comments:  Good mystery plots, clever title. The mystery splits into two separate stories later in the book and it's done well. However, the cover of the book and some of the language could have been more attractive to readers.

In addition, the main character, Sasha, does some unlikely things to earn a living, such as working in the phone sex business. She also does some very illegal things while sleuthing. Though most mysteries have the main character and P.I. doing a few things outside the law to solve the larger crime, Sasha does more than her fair share. However, at the end of the book, she still comes out being a likeable main character.

Thanks to the author for providing a review copy.(This review was listed on Mystery/Crime Fiction Blog Carnival)

This sounds like something I should look for. For starters, I always love books that take place in Toronto, being eager to see how other people view my adopted city. But the story sounds quite good too. Thanks for the review, and I'll go look for the book. :-)

Sounds good and I totally agree with you in regards to the cover. This is one that I wouldn't look at twice...the publisher needs to rethink this one!

For Phyl: if you're in Toronto and want to come to the Blood and Groom launch party on December 8th, drop me a line at

and I will send you the details re: time & location (Yonge & Bloor).

Looks interesting, but the cover doesn't do much for me.

Sounds rather dark, but still interesting.