REVIEW: The Trudeau Vector: A Novel by Juris Jurjevics 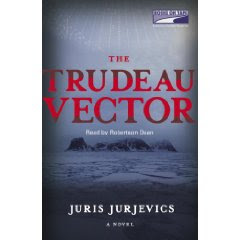 The Trudeau Vector: A Novel by Juris Jurjevics

Biochemists and epidemiologists, those who study diseases, and those concerned about climate change in the Arctic, would love this thriller. I liked it too though I have only a general knowledge of biology. It was a happy find during my stroll through a recent bookstore sale.

Summary: There is something out in the Arctic that killed 3 scientists doing research in that hostile and freezing environment. There are scientists from several countries working on projects in the Trudeau Research Station, built on land that is part of Canada.

Epidemiologist Jessica Hanley is sent out to the station to find the cause for the sudden deaths - biological, chemical, natural or artificial, bioengineered or otherwise - and to find the host or source of the contaminant or organism

Jessica has to deal with her complex investigations and more victims while making time for her personal life - keeping email contact with her young son back in the U.S. and being involved in a new and surprising love affair at Trudeau Station.

Comments: Throw in post-Cold War politics, global warming effects on Arctic fauna and flora, Inuit and Aleut native cultures, submarine lore, and you have a mix that makes this thriller fascinating as well as informative.

Definitely a 5 star novel. The Trudeau Vector: A Novel is published by Viking Books.