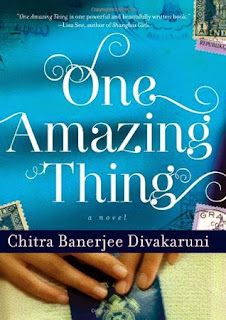 Overview: When nine people are temporarily trapped and confined in a building after an earthquake in a U.S. city, they get to know each other in a way they might not have under normal circumstances. The nine are in an Indian visa and passport office in the building. Of different backgrounds and nationalities, they slowly learn about each other's lives.

Late afternoon sun sneaks through the windows of a passport and visa office in an unnamed American city. Most customers and even most office workers have come and gone, but nine people remain. A punky teenager with an unexpected gift. An upper-class Caucasian couple whose relationship is disintegrating. A young Muslim-American man struggling with the fallout of 9/11. A graduate student haunted by a question about love. An African-American ex-soldier searching for redemption. A Chinese grandmother with a secret past. And two visa office workers on the verge of an adulterous affair.


When an earthquake rips through the afternoon lull, trapping these nine characters together, their focus first jolts to their collective struggle to survive. There's little food. The office begins to flood. Then, at a moment when the psychological and emotional stress seems nearly too much for them to bear, the young graduate student suggests that each tell a personal tale, "one amazing thing" from their lives, which they have never told anyone before. And as their surprising stories of romance, marriage, family, political upheaval, and self-discovery unfold against the urgency of their life-or-death circumstances, the novel proves the transcendent power of stories and the meaningfulness of human expression itself. .

Comments: A good way to introduce a variety of different stories in one book. People are trapped for a short time and, uncertain of the future, reveal themselves through their life stories.  I found myself comparing One Amazing Thing to a book with people similarly confined in a dangerous situation - Bel Canto.

I hope to try her other books, especially The Mistress of Spices, which I have heard positive things about. Chitra Divakaruni has also authored Sister of My Heart, and The Palace of Illusions.