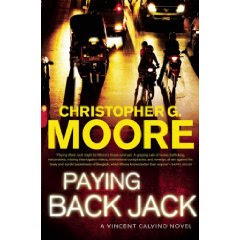 Paying Back Jack is 11th in the detective series featuring PI Vincent Calvino. It has a complex plot about paying back old scores, in Bangkok, a city which seems like one of the most interesting but challenging places in Southeast Asia.

The novel has so many plot components that it's sometimes hard to keep track of and link all the people and their activities. There are personal scores to settle involving people who had worked in many different places - Southeast Asia, in Iraq, and in the Middle East war zones.

The intrigue starts when Calvino is hired by Casey to find the man responsible for his son's death. The case is more complex than it seems. Calvino becomes embroiled in more than he bargained for.


"Casey, the private contractor with interrogation expertise, good street contacts, and a payload of anger over a dead son, was locked in a version of the past fueled by hatred." (p. 206)

This is more than just a detective novel set in an exotic location. Moore's writing shows flashes of creative brilliance as well as insight into the local culture.


"A vapor trail of superstition hung above the table, streaking the conversations with sentiments from an old, traditional culture. For a moment, she almost felt at home."

"He was happy that she finally had what every Thai woman wished for: motherhood. To become the mother goddess was to achieve a vindication, to have climbed to a sacred platform and claimed a throne." (p. 134)


After finishing this book, I thought Moore could easily use his talents to write literary fiction.

I then discovered, thanks to a comment by blogger Mark David, that Moore has written 20 books, including short stories and nonfiction books on Thai culture and customs. In this Amazon link, Christopher G. Moore, there is a list of titles in his Vincent Calvino PI series. Moore, a Canadian, has lived in Bangkok since 1988 and has a background in law.