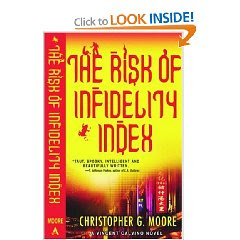 P.I. Calvino makes a surveillance video of an outfit manufacturing fake drugs in Bangkok, but the lawyer who hired him for the job dies from an apparent heart attack before paying Calvino for the video.

To find out more about his dead client, Calvino takes a job from three mem farangs, foreign women, whose husbands may know more about his client. The women hire Calvino to spy on their husbands for any signs of cheating. Bangkok has a high infidelity risk factor, according to a book the women have been reading, The Risk of Infidelity Index. Calvino wheedles information from the women about their husbands who knew his dead client, finds out who's behind the fake drug making scam, and finally gets paid for his work, all while risking his life many times over and barely escaping intact.

My favorite secondary characters in the novel are Colonel Pratt, a local police officer who helps keep Calvino alive, and Calvino's office assistant, Rachana. Both are staples in the suspenseful detective series.

Recommendation: For those who like detective crime fiction in international settings. I rated this four out of five stars. I also gave 4 stars to the 11th Calvino book, Paying Back Jack.