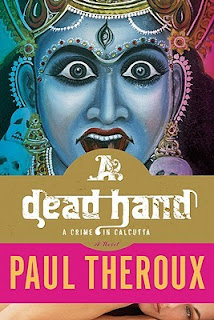 Summary: Jerry Delfont is a failed writer, a writer with a "dead hand" that can no longer write as he has no ideas left. He goes to a city he obviously dislikes, Calcutta, to find inspiration or material for his writing, and stays after meeting an intriguing expatriate, Mrs. Unger, who inflames his imagination and his passion, with her beautiful silk saris and tantric massages, her philantrophy, and her worship of the goddess Kali.

When Mrs. Unger asks Jerry to help a friend escape a possible murder charge, Jerry plays detective and sets out to do Mrs. Unger's bidding.

Comments: Don't let the cover scare you. That's only Kali, the Hindu goddess of destruction and creation, according to Theroux in this book set in Calcutta, India.

I saw A Dead Hand as another one of Theroux's travel books, this one masquerading as a crime novel. The characters give their frank opinions about the hot, dusty city and about the people who come to live in India. Even Mother Theresa doesn't escape their critical eye. Those comments and observations were more interesting to me than the murder mystery, which you can easily solve early in the book, I thought. I guessed the culprit(s) and possible motives half way through. Theroux drops hints here and there and then just about layers the pages with clues and insinuations that can only lead to one logical conclusion. Only the details were left to be filled in. Wanting to know the details kept me reading to the end.

Comments: I gave this book 4 stars as a travel book in disguise, 4 stars as a book about social injustice, and 3 stars as crime fiction.

Great review. I hadn't heard of this book. Sounds interesting. The cover is unusual.

I would love to read this book, and frankly, I like the cover!

what an interesting book! and that cover really jumps ut at you!

I have this on my wish list, but first I want to read Brazzaville Beach by him to see if I like his writing. thanks for sharing your thoughts Harvee.

Well, your review sold me...but then I like Theroux's work...Travel Writing/Fiction..the whole thing. And I LIKE the cover!

This sounds like something I would like, even if the mystery itself was rather easy to figure out. I love reading about other countries and books that touch on social injustices. Thanks for bringing this one to my attention!