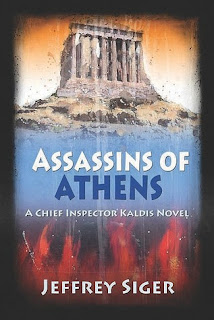 Sounds like a good mystery, but I love the setting. I don't think I've ever read a book that takes place in modern Greece.

Sounds like a very interesting read - though I've just been learning about the ancient Athens custom of ostricising so maybe I'm just curious about the subject matter (and how they've linked it to the modern world). Thanks for sharing your thoughts on this book.

Sounds interesting. Books set in (new to me) exotic locations where you can learn things about the culture and people are fun.

Definitely sounds interesting - I like the concept of that tradition being revived - good plot :)

Jemi: the old guys who revived the tradition didn't do so well in the book, though it explained their motives.

Interesting, both of them. I hadn't heard about his previous Murder in Mykonos book though, thanks for posting it!