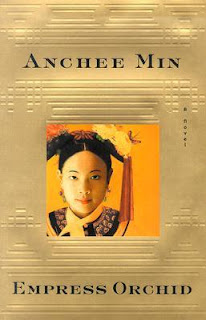 "My mother was taught the Ch'an concept of happiness, which was to find satisfaction in small things. I was taught to appreciate the fresh air in the morning, the color of leaves turning red in autumn and the water's smoothness when I soaked my hands in the basin."  (ch. 1)

Comments: I found this book among my niece's pile of books that I am storing until she reorganizes.  I've found some good books among hers, and this is another one. The writing is smooth and poetic and the novel is full of fascinating historical details about Yehonala, the last empress of China, a Manchu who ruled the Qing dynasty for over 40 years until it fell in the early 1900s. 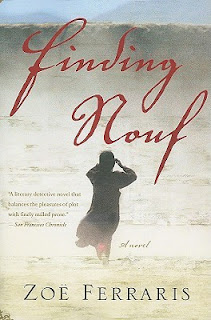 This book I found on sale at the bookstore, a lucky find, as I love both mysteries and books that tell about other countries and cultures.

Here's a description of the book from Goodreads, which uses Barnes and Noble's book summary:  "In a blazing hot desert in Saudi Arabia, a search party is dispatched to find a missing young woman. Thus begins a novel that offers rare insight into the inner workings of a country in which women must wear the iabaya/i in public or risk denunciation by the religious police; where ancient beliefs, taboos, and customs frequently clash with a fast-moving, technology-driven modern world.

The missing woman is Nouf Shrawi, one of several sheltered teen aged daughters of a powerful local family. Hired to track her and her potential abductor is Nayir, a solitary, pious desert guide of dubious origin, and a friend of the family. As Nayir uncovers clues that only serve to deepen the mystery behind Nouf's disappearance, he teams up with Katya, a liberated Saudi woman who is engaged to one of Nouf's brothers.

As they move closer to the truth, the pair's detective work unveils layers of secrets. In a land of prayers, purity, and patriarchy, the dreams of mere mortals often go unrealized, and the consequences of misbehavior for both men and women are disastrous. The final revelation of the truth forces Nayir to confront his own attitudes about women and society and in his deepening relationship with Katya, to face up to his own long-denied yearnings for love and intimacy.

Comments: I've just started this mystery novel and find it intriguing on many levels.

Found Books is an occasional meme to introduce books recently bought or "found." You are welcome to join in!
at January 27, 2011

That's a nice passage you chose to share from Empress Orchid.