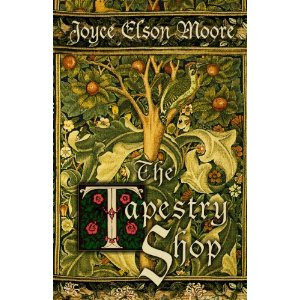 "Catherine glanced at the musician; all eyes were on him. This musician has smitten all the ladies and probably cannot see past his Norman nose, pampered as he is in court circles." (ch. 7)

Goodreads description: "The Tapestry Shop, by Joyce Elson Moore, is an historical novel based on the life of Adam de la Halle, a 13th century poet/musician who entertained in France's royal courts and who left behind a vast collection of secular compositions.

While researching Adam's music, the author discovered ... that the earliest version of the Robin Hood legend may have been Adam's play, Le Jeu de Robin et Marion. Because Adam was patronized by royalty, his play was probably performed in English courts, and would have changed, as legends do. In the retelling, Robin became an English hero, and Robin's companions became the Merry Men.

The book draws the reader into the Middle Ages, where women joined the crusades and students held discourse on the Street of Straw, but the overriding appeal of The Tapestry Shop may be Adam's connection to the popular legend of Robin Hood."

Comments: Romance, religion, history, music and poetry all rolled into one in this novel by Joyce Elson Moore about Adam de la Halle, a French trouvere or troubadour whom she did extensive research on for her novel. Well worth while for lovers of poetry and literature, history, and legend.