Welcome to the Sunday Salon. Click on the logo to join in!

I've read only three books since last Sunday but enjoyed A Heartbeat Away by Michael Palmer, Finding Nouf

by Zoe Ferraris, and a third, 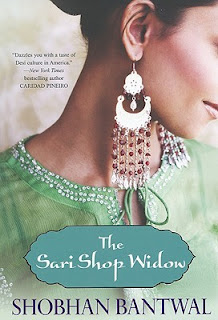 Since becoming a widow at age twenty-seven, Anjali Kapadia has devoted herself to transforming her parents' sari shop into a chic boutique, brimming with exquisite jewelry and clothing. Now, ten years later, it stands out like a proud maharani amid Edison's bustling Little India. But when Anjali learns the shop is on the brink of bankruptcy, she feels her world unraveling. . .

To the rescue comes Anjali's wealthy, dictatorial Uncle Jeevan and his business partner, Rishi Shah--a mysterious Londoner, complete with British accent, cool gray eyes, and skin so fair it makes it hard to believe he's Indian. Rishi's cool, foreign demeanor triggers distrust in Anjali and her mother. But for Anjali, he also stirs something else, a powerful attraction she hasn't felt in a decade. And the feeling is mutual. . .

Love disappointed Anjali once before and she's vowed to live without it--though Rishi is slowly melting her resolve and, as the shop regains its footing, gaining her trust. But when a secret from Rishi's past is revealed, Anjali must turn to her family and her strong cultural upbringing to guide her in finding the truth. . ."

Comments: I learned a lot about Indian-Americans and Gujarati family traditions, how the East and the West meet and co-exist in contemporary times. I recommend this for those who read women's fiction and international authors.

My next read is Sometimes I Feel Like a Nut: Essays and Observations by Jill Kargman, a new release.

The Sari Shop Widow sounds good. I am glad you enjoyed it Harvee. I have Ferraris' book in my TBR collection to read. I believe it got packed away already for our move so it'll have to wait.

I'm reading a nonfiction book at the moment called The Man Who Loved Books to Much. My husband gave me the book as a gift--I think he thought the title fit me. LOL

I hope you have a great week!

I have been meaning to read a book by Shobhan Bantwal for some time now - glad to hear good things about this one. I may try to read it for S. Krishna's South Asian Author Challenge this year.

I adored The Sari Shop Window. Have a lovely and relaxing Sunday.

I read this a while back and liked it. Think I rated it the same as you. Nice review Harvee

Oh, this book sounds tempting...I like books that surround the reader with sights, sounds, and scents...all of which enrich the reader's experience.

I have this book on my kindle, and would really love to read it! It looks wonderful!

I've been meaning to read this one..I thought it sounded really interesting when it first came out. Too many great books to read and not enough time!!!

Sounds like you've read some interesting books since last week. I'll have to check these out.

I had my eye on this one for a while but then forgot about it. This post was a good reminder.

I haven't read three books in the past three months, dear friend. No worries :)

Glad to be dropping by your blog again, and finding that you're still here, reading :)

Mark David: It's the beginning of a new lunar year and I am feeling more optimistic. So nice to see you reading our blogs and commenting, once again.