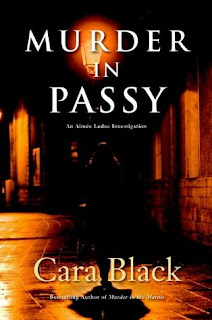 Murder in Passy: An Aimee Leduc Investigation Set in Paris

Product description: The village-like neighborhood of Passy, home to many of Paris’s wealthiest residents, is the last place one would expect a murder. But when Aimée Leduc’s godfather, Morbier, a police commissaire, asks her to check on his girlfriend at her home there, that’s exactly what Aimée finds. Xavierre, a haut bourgeois matron of Basque origin, is strangled in her garden while Aimée waits inside. Circumstantial evidence makes Morbier the prime suspect, and to vindicate him, Aimée must identify the real killer. Her investigation leads her to police corruption; the radical Basque terrorist group, ETA; and a kidnapped Spanish princess.

Comments: Cara Black's characters come alive in Paris in this vivid portrait of the Basque immigrants of the city and the tangle of their politics. Another superb mystery with the main character, a chic computer security specialist, Aimee Leduc, and her business partner and sidekick, Renee.
Rating: 5/5 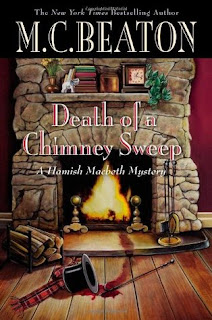 Product description: In the south of Scotland, residents get their chimneys vacuum-cleaned. But in the isolated villages in the very north of Scotland, the villagers rely on the services of the itinerant sweep, Pete Ray, and his old-fashioned brushes. Pete is always able to find work in the Scottish highlands, until one day when Police Constable Hamish Macbeth notices blood dripping onto the floor of a villager's fireplace, and a dead body stuffed inside the chimney. The entire town of Lochdubh is certain Pete is the culprit, but Hamish doesn't believe that the affable chimney sweep is capable of committing murder. Then Pete's body is found on the Scottish moors, and the mystery deepens. Once again, it's up to Hamish to discover who's responsible for the dirty deed--and this time, the murderer may be closer than he realizes.

Comments: Another delightful mystery with the unorthodox Constable Hamish Macbeth solving crime in the north of Scotland. Full of the atmosphere of  a highland village, the various characters breathe life into this mystery series, and in this novel, Hamish's unusual pets, a dog and a wild lynx-like cat,  play an important role.
Rating: 5/5 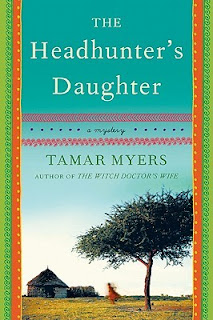 The Headhunter's Daughter: A Mystery

Goodreads description: From Tamar Myers, author of The Witch Doctor's Wife, comes a spellbinding tale of equatorial Africa and a child torn dangerously between two worlds.

In 1945, an infant left inadvertently to die in the jungles of the Belgian Congo is discovered by a young Bashilele tribesman on a mission to claim the head of an enemy. Recognized as human—despite her pale white skin and strange blue eyes—the baby is brought into the tribe and raised as its own. Thirteen years later, the girl—now called "Ugly Eyes"—will find herself at the center of a controversy that will rock two separate societies.

Young missionary Amanda Brown hears the incredible stories of a white girl living among the Bashilele headhunters. In the company of the local police chief, Captain Pierre Jardin, and with the witch doctor's wife, the quick-witted Cripple, along as translator, Amanda heads into the wild hoping to bring the lost girl back to "civilization." But Ugly Eyes no longer belongs in their world—and the secrets surrounding her birth and disappearance are placing them all in far graver peril than anyone ever imagined.

Comments: Interesting new series set in the Congo in the 1950s, by the author of the popular Den of Antiquity and the Pennsylvania Dutch mystery series. The series features Amanda Brown from South Carolina who travels to Africa to run a missionary guest house. Author Tamar Myers was born in the Congo of missionary parents. She uses her background experience for this new series.
Rating: 3.75/5 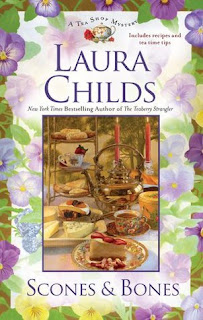 Publisher's description: Indigo Tea Shop owner Theodosia Browning is lured into attending the Heritage Society's "Pirates and Plunder" soiree. But it's an antique diamond skull ring that gets plundered by someone who murders a history intern in the process. Theodosia knows she'll have to whet her investigative skills to find the killer among a raft of suspects.
Comments: Atmospheric tea shop mystery with a murder investigation sandwiched inbetween tea time conversations, tea lore, recipes, and Charleston high society events. A bit frilly for more die-hard mystery lovers, but cute!
Rating: 3.5/5
- March 12, 2011