Book Review: The Bond: Our Kinship with Animals by Wayne Pacelle

The Bond: Our Kinship with Animals, Our Call to Defend Them 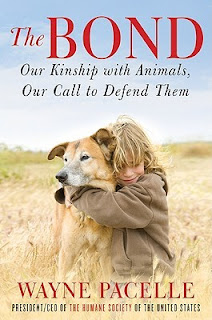 "Along with sorrow, animals also fall into depression just like us....That animals experience emotional trauma when they're isolated, mistreated, or bereaved should not surprise us...
The hurts and losses that animals experience are more than skin deep, as in the especially poignant case of elephant calves who have seen their parents killed by poachers. Well into their lives, if not forever, they show signs of posttraumatic stress disorder."
(p. 77)

Comments: Though I love going to zoos, I can feel for the animals who don't have wide spaces to roam around in, as many zoos have today. I love seeing elephants and other animals in a simulation of their natural environment. There is only one animal I won't go out of my way to see, and that is the mountain gorilla, who is most often caged because of its size and strength. The intelligence in its eyes and its awareness of its confined circumstances is not something I enjoy seeing. If I had my way, there would be none of these animals in zoos!

A wonderful book that everyone should read!

Product Description
"A fascinating exploration of humanity's eternal bond with animals, and an urgent call to answer the needs of millions of at-risk creatures

A landmark work, The Bond is the passionate, insightful, and comprehensive examination of our special connection to all creatures, written by one of America's most important champions of animal welfare. Wayne Pacelle, the president of the Humane Society of the United States, unveils the deep links of the human-animal bond, as well as the conflicting impulses that have led us to betray this bond through widespread and systemic cruelty to animals.

Pacelle begins by exploring the biological and historical underpinnings of the human-animal bond and reveals our newfound understanding of animals, including their remarkable emotional and cognitive capacities. In the book's second section, Pacelle shows how the bond has been disastrously broken. He takes readers to a slaughter plant shuttered for inhumane practices, as well as the enormous egg factory farms of California. We visit Leavenworth Federal Penitentiary in Kansas to speak with NFL star Michael Vick, then serving his sentence for dogfighting. Pacelle paints a portrait of New Orleans in the aftermath of Hurricane Katrina, and highlights the heroic actions of residents and volunteers to reunite pets with their owners. Pacelle's narrative also leads the reader to remote locations in which conflicts over the killing of wildlife continue to play out—from the fields outside of Yellowstone National Park where bison are slaughtered with the encouragement of federal authorities, to the ice floes of Atlantic Canada where seal nurseries turn into killing fields.

In its final section, The Bond takes on the arguments of opponents and critics of animal protection and spotlights the groups and industries standing in the way of progress—from the National Rifle Association and agribusiness organizations like the American Farm Bureau, to surprising adversaries like the American Veterinary Medical Association and the American Kennel Club. Ultimately, Pacelle points the way to a new, humane economy—one not built on extraction, suffering, and killing, but on the celebration, stewardship, and care of animals.

An eye-opening must-read, The Bond reminds us that animals are at the center of our lives, they are not just a backdrop. How we treat them is one of the great themes of the human story."
- April 12, 2011