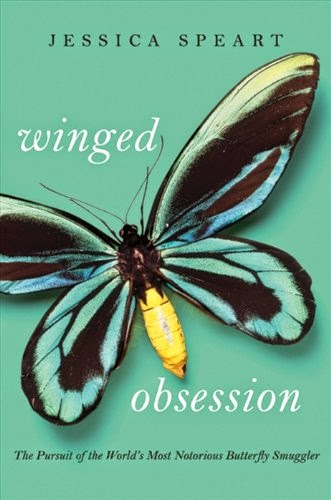 Winged Obsession: The Pursuit of the World's Most Notorious Butterfly Smuggler

"This is for you. It has all of my picture files with thousands of butterflies. You can use it to post photos on eBay of the butterflies that we offer," Kojima instructed.

Newcomer would soon learn that among the bugs on the disc were not only many protected species but also endangered ones. " (p. 55)

Book description:
A tale of greed, obsession, and sexual temptation in the vein of The Orchid Thief - the story of the world's most wanted butterfly smuggler, the rookie U.S. Fish and Wildlife agent Ed Newcomer who pursues him, and Jessica Speart, the writer, who found herself at the center of the story.

I didn't realize at first that this was not one of Jessica Speart's well known environmental mystery novels, but a true story of the hunt to "reel in" a notorious smuggler of butterflies and insects, a trader in the market to supply insect collectors.

The work of nonfiction reads like a thriller, however, with the smuggler the target of a U.S. Fish and Wildlife agent. The book brings to light the environmental threat posed worldwide by illegal collectors.

About the Author: Jessica Speart is a freelance journalist specializing in wildlife enforcement issues.She is also the author of ten mysteries with an environmental theme. http://www.jessicaspeart.com/

This looks like a book that I'd enjoy. I think I read something similar a year or so ago.

I had no idea this is non fiction. I'm reading a work of fiction about butterflies right now.

Interesting! Butterflies on the black market seems so wrong, doesn't it?

This sounds good and I do really love the cover.