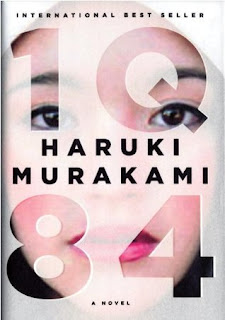 My take on the novel in a nutshell: A crime thriller plus a love story in an alternate reality full of magic and fantasy. 1Q84 starts out being a thriller, one of my favorite genres, and I was quite surprised by this. It then also became a love story between two people, Tengo and Aomame.

Fantastical and magical things and people appear  in the novel - the Smurf-like Little People, for one, and the Air Chrysalis - devices that almost seem like children's fantasies. But this is no book for children. There is explicit sex and calculated murder, but also sympathetic looks into the hearts and minds of some of the main characters. Tengo in particular, is a very likable mathematician turned writer, whose relationship with his dying father adds a touch of pathos to the novel. His search for his grammar school classmate, Aomame, and her search for him, is the love story that fuels the novel.

In the plot, Tengo and Aomame both enter an alternate reality, 1Q84, when Tengo rewrites a book, Air Chrysalis, written by the enigmatic teenager Fuka-Eri, and when Aomame climbs down a long metal staircase from one level of the expressway to the next and from one reality to another. In this alternate world that declares itself by the two moons hanging in the sky, the two try to find each other, though they met since the third grade about 20 years before.

Religion is an important link between Tengo and Aomame, and 1Q84 takes aim at religious cults - those controlling Big Brother-like organizations in which children are sexually and mentally abused and  all their members restrained psychologically. The book also seems to focus on women avenging the crimes of severely abusive men, making sure they are dispatched to "another world" in order to prevent them from continuing.

In such a long and complex book, there is bound to be a lot more to discuss. For instance, Murakami follows the idea that time does not flow in a straight line. In 1Q84, time twists around, reality shifts, and the past can sneak up unannounced behind you. These are just a very few of the interesting themes I found.

Besides the thriller and love stories, I liked how well the main characters were developed in the book, the careful and realistic descriptions of physical features, personality, and motives. Murakami's comments on writing are also interesting, as are the ways he weaves a world of magic and fantasy into the novel.

I'd love to hear from others who have read 1Q84.. What do you think about the book?