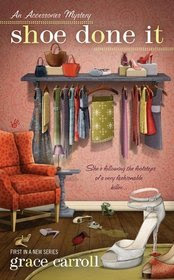 
"Could you tell her she is in serious legal trouble if she doesn't return the shoes to me right now? Otherwise I'll be forced to call the police." (ch. 3)

San Francisco society lady MarySue Jensen insists on having these special hand spun silver shoes to wear to a Golden Gate Park gala event, even though she can't pay for them. She walks out of Dolce's Boutique with them anyway, which leaves Rita Jewel, the new shop assistant, with the idea that she must get them back at all cost. Loss of the shoes would mean ruin for her employer Dolce and her high end fashion shop. When Rita tries to climb into the second story window of MarySue's house to recover the shoes, she is pushed away by Rita, the ladder she is on falls, and she is taken to the hospital with a concussion.

In the meantime, the gala event takes place but MarySue is found dead there, sitting in an Adirondack chair with her feet bare and the shoes gone. Rita and Dolce may both be suspects, even though Rita can prove she was unconscious in the hospital when MarySue was murdered. It's up to Rita to clear her employer Dolce,  find the real killer, and save both the shop and her job.

Comments: An enjoyable cozy if you don't mind brand names of high end clothing and shoes going over your head; at least they did over mine. What carried the book was the character, Rita Jewel, whose fashion sense and gutsiness made the book fun to read.  I had to suspend disbelief though, at the thought that loss of the silver shoes could lead to the end of a successful clothing shop. It was hard for me to imagine the extremely valuable "hand spun silver shoes" although later in the book, too late, they were described as having encrusted jewels. Apart from that, it was easy to get through this cozy, the first in a new series.

The high end fashion references would probably go over my head, but I love a good cozy, and like to get in on the ground floor of a series, so I'll have to look for this one.

I love shoes, so this one sounds excellent to me! I also like the fact that this is the first in a series as well. Great review! I need to check this one out!

I think this one sounds fun. I'm not big on designer names but if I like the characters I would enjoy this one.

Sounds cute - I probably wouldn't get the references either. Good review.
Ann