Outside the Lines: a Novel by Amy Hatvany - Opening Sentences 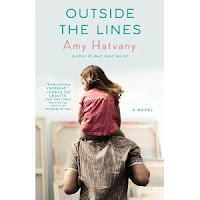 The call came at three thirty in the morning, a time slot predestined for the arrival of bad news. No one calls to tell you you've won the lottery in the middle of the night. Your boyfriend doesn't call you to propose.

The shrill of my cell phone dug into my dreams and wrenched me from sleep. This is it, I thought. He's dead. Six months ago, I'd given the morgue at Seattle General my number along with a copy of a twenty-year-old picture of my father. "I don't care what time it is," I told the hospital administrator. "If he turns up, I'll come right away." (p. 1)

Publisher's description: "When Eden was ten years old she found her father, David, bleeding out on the bathroom floor. The suicide attempt led to her parents’ divorce, and David all but vanished from Eden’s life. Since childhood, she has heard from him only rarely, just enough to know he’s been living on the streets and struggling with mental illness. But lately, there has been no word at all.

Now in her thirties, Eden decides to go look for her father, so she can forgive him at last, and finally move forward. When her search uncovers other painful truths—not only the secrets her mother has kept from her, but also the agonizing question of whether David, after all these years, even wants to be found—Eden is forced to decide just how far she’ll go in the name of love."

About the author: Amy Hatvany is the author of three other novels, including Best Kept Secret. She lives in Seattle with her family.
at January 27, 2012

Oh my, this book does indeed sound heart-wrenching and sad, but also very, very interesting. I need to see if my library has a copy of this one, as it sounds like something that I could really get into. I liked reading your perspective on it. Thanks!

I hadn't heard of this one before but it does sound like something I would like. I'll have to see if my library has it.

Wow! I want to read more...thanks for the tease!

This sounds like a riveting story, one that will keep me reading late into the night! It also sounds sad and jarring with some dysfunctional characters. I'm very interested in the secrets Eden uncovers.