Opening Sentences: The Invisible Ones by Stef Penney 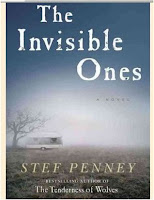 "When I woke up, I remembered nothing -  apart from one thing. And little enough of that: I remember that I was lying on my back while the woman was straddling me, grinding her hips against mine. I have a feeling it was embarrassingly quick; but then, it had been a while. The thing is, I remember how it felt, but not what anything looked like.When I try to picture her face, I can't. When I try to picture the surroundings, I can't. I can't picture anything at all. I try; I try really hard, because I'm worried.
After some time, one thing comes back to me: the taste of ashes.

As it turns out, the memory loss may be the least of my problem."

Publisher's description: PI Ray Lovell veers between paralysis and delirium in a hospital bed. Before the accident, he'd been hired to find Rose Janko, the wife of a charismatic son of a traveling Gypsy family, who went missing seven years earlier. Half Romany himself, Ray is surprised by the intense hostility from the Jankos. Touched by tragedy, they're either cursed or hiding a terrible secret, which Ray can't help suspecting is connected to Rose's disappearance.

Email ThisBlogThis!Share to TwitterShare to FacebookShare to Pinterest
Labels: opening sentences, The Invisible Ones