Book Review: From the Ashes by Jeremy Burns

Comments: A political not a religious thriller, From the Ashes reminded me nevertheless of The DaVinci Code, in its message of old conspiracies, deadly secrets carried into the present, and lots of codes as clues. In this case, a graduate student Michael is killed when he discovers a political cover up from the days preceding and during WWII. His older brother Jon and his fiancee Mara find Michael's notebook with maps and notes and try to discover the secrets that led to Michael's death.

In the novel, the late billionaire philanthropist John D. Rockefeller Jr. and the Hoover administration made decisions in the early 1930s regarding Germany, the Communist movement, and the emerging Nazi party. A secret arm of the CIA is hell bent on keeping these a secret and finding Rockefeller's revealing Dossiers, hidden among the buildings and monuments Rockefeller funded and built in the middle of Manhattan. Rather than the Vatican City as in the DaVinci Code, the setting the two protagonists rush through is Manhattan, where they discover clues that lead to other clues to the hidden Dossiers, which the Division and its assassins are dedicated to find and either hide or destroy.

Lots of action, with very bad guys hunting Jon and Mara as they try to work their way in and out of this political and historical maze. A very enjoyable plot- centered read. How much of the history, if any, might be truth or fiction is left by the author for the reader to decide. 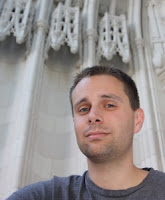 About the author: Jeremy Burns is a former educator and journalist. He taught literature, political science, creative writing, and philosophy at an international school in Dubai, and has traveled to countries across four continents. He lives in Florida, at work on his next novel.


Thanks to Partners in Crime Virtual Book Tours for a review copy of this book. Click on their link for more tour hosts and reviews of From the Ashes.
at April 18, 2012

I like fast moving and plot heavy reads, so this is something that I might possibly enjoy. I will have to look into this one. Your review was really wonderful and thorough, and gave me a really good idea of what to expect with this book. Great review today!

This does sound like a page-turner! Terrific review, Harvee!

Sounds like one I would enjoy. Of course, I'm a DaVinci Code fan, too.

Political reads are usually not my thing, but with the history and maze type aspects I am intrigued. Thanks Harvee :)

Even though this isn't my cup of tea it does have some promise!