Mailbox Monday is hosted in June by Burton Book Review. These books arrived in my mailbox recently, sent by the publishers. 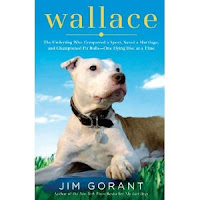 Title: Wallace: the Underdog Who Conquered a Sport, Saved a Marriage, and Championed a Breed - One Flying Disc at a Time
Release date: August 30, 2012 by Gotham

New York Time bestselling author of The Lost Dogs writes about an unwanted pit bull rescued in 2005 from a shelter who became an international celebrity. A true story. Today, Wallace is a champion. But in the summer of 2005, he was living in a shelter, a refugee from a suspicious pit bull–breeding operation. Andrew “Roo” Yori entered the picture. A scientist and shelter volunteer, Roo could tell immediately that Wallace was something special. Roo learned that Wallace was about to be put down. Frantic—and even though they already had two dogs—Roo and his wife fought to keep Wallace alive until they could adopt him.

Serendipity led them to the world of competitive Frisbee dogs. It seemed like a terrible idea. Pit bulls are everything that most Frisbee dogs aren’t: large and heavy with thick muscles that can make them look less than graceful. But that was fine with Roo—because part of his mission was to change people’s minds about pit bulls. After overcoming everything from injuries to prejudice against the breed, the unlikely pair became World Champions. (book description)

By the author of Mercy also known as The Keeper of Lost Causes, this is a new thriller in the same Department Q series. The two books in the series will be made into movies in 2013.

A homeless girl on the streets of Copenhagen carries secrets about some powerful people. But she has a secret of her own. They are looking for her, but so is Detective Carl Merck of Department Q.

Twenty-six bestselling authors collaborated to write one mystery, No Rest for the Dead. Each writer wrote a chapter in the thriller about Joe Nunn, a detective, who tries to find the true murderer of a curator of a San Francisco museum.

Email ThisBlogThis!Share to TwitterShare to FacebookShare to Pinterest
Labels: Diusgrace, Mailbox Monday, memoir, mystery, No Rest for the Dead, The Skeleton Box, Wallace the Underdog

Given the synopsis, Wallace sounds like an amazing dog!!

I like the look of Disgrace...hope you enjoy them all. And thanks for visiting my blog.

Aw, Wallace looks like a book that will make you smile!! Enjoy your new books!

My kind of books!

Both Disgrace and Wallace caught my eye. Happy reading!

Wallace does sound terrific! Enjoy each of your new books. :)

Interesting mix of books. Have a great week and happy reading!

'Disgrace' and 'The Skeleton Box' have gone straight onto my reading list, thanks for sharing those.

'No Rest For The Dead' is the one that is really intriguing though.
Having checked this one out and discovered the impressive list of authors who have collaborated on the book, I am just wondering how successful it has been as an exercise.

I shall await your review of this book with interest.

Out of all of those the dog book appeals to me most, although I wonder if it's a tearjerker the way some animal books are.

I'm a sucker for a book with a dog on the cover!!

Wallace has my attention, what a great looking dog!! I think you got quite the mixture of genres in your mailbox!! Enjoy!

Wallace is so cute! Enjoy your books.

Leslie (Under My Apple Tree) said...

Wallace sounds like a good one... the cover got me right away.

Sound great lots of good mystery to get to

Wow, what a great lot of books. The thrillers look fun, especially the the on written by 26 authors sounds intriguing. I'd be interested to see how well so many different styles come together for a single novel.

Oh, and the pitbull book? Just proof that there is no such thing as a vicious breed.

Nice to see you've got a Jussi Adler-Olsen book. This second book in the series wasn't quite as good as the first, but still a nice read.

I've got to get my hands on that multi-author crime mystery. Thanks for sharing.