Book Review: The Thing About Thugs by Tabish Khair

Book description: A novel of a young Indian man’s misadventures in Victorian London as the city is racked by a series of murders.

In a small Bihari village in India, Captain William Meadows finds Amir Ali, just the man to further his research and study of the shape of skulls. Ali is a  reformed member of the infamous Thugee cult, which gave the name to the English word "thug." After Ali travels to England to work for Meadows, a killer begins serial attacks in London, and suspicion naturally falls on Ali, the former “thug.” With help from other immigrants and a shrewd Punjabi woman, Ali attempts to save himself and end the gruesome murders.

The Thing about Thugs was short-listed for the 2010 Man Asian Literary Prize.

My thoughts: Khair's writing at the beginning of the book reminds me of that of Charles Dickens. This is praise, as I love Dickens!  Amir Ali's unearthing of graveyard bodies for their skulls took me back to Dickens's A Tale of Two Cities and a similar graveyard scene. As this book is set in the same time period, Victorian England and the 19th century, the style of writing is well suited to the story.

There are three different narrators and story lines in the book, but I had to work harder than I normally like to keep them straight and to connect the stories. There is the first person narrator of the novel in the present time; there is the voice of William Meadow in his notes and interviews with Amir Ali during his research in India, and there are the personal letters of Amir Ali baring his soul about the murder of his family in India and other events.

What I came away with from the book is the contrast and similarities between the "thugs" of 19th century India and the underworld of Victorian England. The Thugee cult existed to perform ritual murder; in Victorian England murder was committed but for more personal reasons, for profit or through extreme perversity. The fact that suspicion fell right away on Amir Ali the "thug" when people were being killed and beheaded in London by a serial killer or killers was perhaps meant to show some blindness on the part of the Londoners about what could go on in their own society.

Amir Ali, the central character in the novel, is well developed. We know about him and his background through his letters and through Meadows' interviews with him in India and also through the omniscient narrator of the book.

I recommend The Thing about Thugs for those interested in Indian history, the Thugee cult, and for those who want to read a good Victorian novel of suspense. 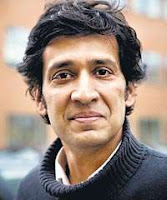 Tabish Khair is an award-winning poet, journalist, critic, educator and novelist. A citizen of India, he lives in Denmark and teaches literature at Aarhus University. His website is http://www.tabishkhair.co.uk/

For more reviews of  The Thing About Thugs,
visit the TLC blog tour. I received a complimentary ARC of this book for review.

I love Dickens, so you have captured my attention with this review! It does sound really complex, but also like a very intriguing read and one that I think I am going to have to try. Thanks for your excellent review today!

Sounds like an excellent book. Will immediately put it on my to-read list. Found your blog through Book Blogs and am now following. Would be grateful if you'd take a look at my blog: www.laurabesley.blogspot.com
Thanks!

When you mentioned Dickens my eyebrow shot right up! Love Dickens!

Sounds like an intriguing read with all the right elements. Enjoyed your review and will have to add this one to my wish list.

I really love Dickens as well, so your comments are high praise indeed!

Great review! I love me some crime, mixed up with India and Victorian times :) I'll add it to my to-read list. Thanks for highlighting this book.

This one appeals to me..I'm always curious about the underbelly of society!